Pools Around the Temple

On our recent trip to Israel, while we were in the area of the Antonia Fortress, our guide Zack showed us some artwork that I found to be a helpful illustration of the area north of the temple in Jerusalem. 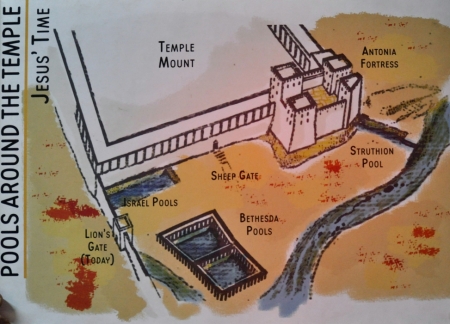 This is useful for showing the location of the Antonia Fortress, which would have housed the Roman soldiers stationed in Jerusalem to keep peace (to the chagrin of the Jewish nation). While many believe that it would have been here that Jesus was put on trial before Pilate, it is more likely that Pilate would have been at Herod’s palace there in Jerusalem. For more on this, see the excellent post by Ferrell Jenkins here.

The Antonia Fortress would have been the location of the barracks where Paul was taken when some Jews in Jerusalem were enraged to the point of seeking to kill him: “the commanding officer ordered Paul to be brought back into the barracks. He told them to interrogate Paul by beating him with a lash so that he could find out the reason the crowd was shouting at Paul in this way (Acts 22:24, NET).

This illustration is also helpful in visualizing the setting of John 5, where Jesus healed the man who had been paralyzed thirty-eight years: “Now there is in Jerusalem by the Sheep Gate a pool, which is called in Hebrew, Bethesda, having five porches” (v.2). Here you can see the location of the sheep gate, as well as the twin pools of Bethesda. 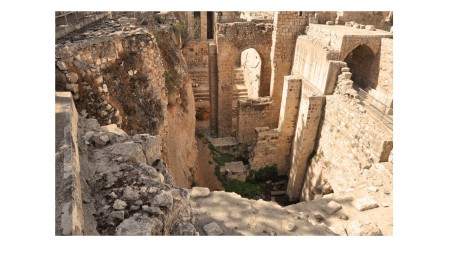 Excavations at the Pool of Bethesda. Photo by Leon Mauldin.

My previous posts on Bethesda can be seen by clicking here, here, here and here.

When you study the Bible, you are studying real events, real places, real people!

This entry was posted on Thursday, November 17th, 2016 at 4:35 PM and is filed under Bible History and Geography, Bible Study, Israel, Jerusalem, New Testament, photography, Travel. You can follow any responses to this entry through the RSS 2.0 feed. You can leave a response, or trackback from your own site.