The Gospel of John records several of the “I Am” statements of Jesus. In John 10 we have Jesus’ reference to Himself as the Good Shepherd:

The metaphors of the shepherd and the sheep are a common biblical motif. The shepherd of Luke 15 leaves the 99 safe sheep and goes after the sheep which is lost, “and when he has found it, he lays it on his shoulders, rejoicing” (vv.4-5). Our photo helps us visualize the biblical text. 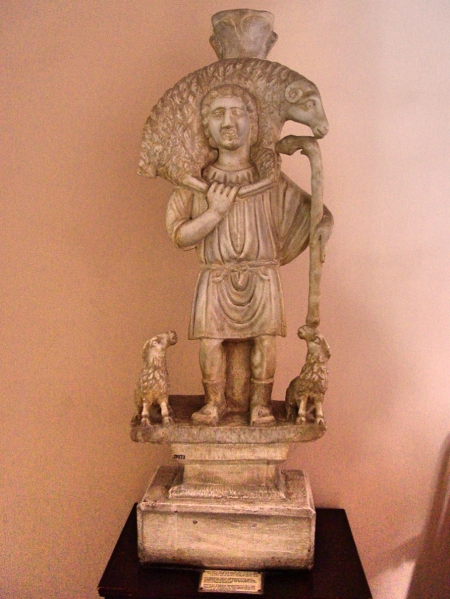 I took the above photo in 2003, in the Bibliotheca Alexandrina Antiquities Museum. The statue is identified as “Jesus the Good Shepherd.

Sheep need a shepherd! “All we like sheep have gone astray; We have turned, every one, to his own way; And the LORD has laid on Him the iniquity of us all” (Isa. 53:6). Truly Jesus is the Shepherd who cares for the sheep, who laid down His life for the sheep, that we might have life. Jesus said, “My sheep hear My voice, and I know them, and they follow Me; and I give eternal life to them, and they will never perish; and no one will snatch them out of My hand” (John 10:27-28).

Shepherd with His Sheep

When visiting biblical sites I never tire of seeing sheep and their shepherds. I’m sure that is due in large measure to the frequent references in the Bible, not only to literal shepherds and sheep, but also the metaphorical usage. 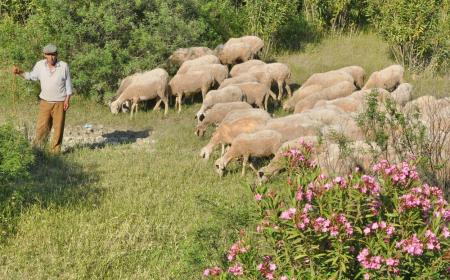 Shepherd with sheep in biblical Pamphylia. Photo by Leon Mauldin.

Isaiah 53:6 All we like sheep have gone astray; We have turned, every one, to his own way; And the LORD has laid on Him the iniquity of us all.

John 1:29 The next day John saw Jesus coming toward him, and said, “Behold! The Lamb of God who takes away the sin of the world!

1 Peter 2:25 For you were like sheep going astray, but have now returned to the Shepherd and Overseer of your souls.

Elders of local churches are told: 1 Peter 5:2 Shepherd the flock of God which is among you, serving as overseers, not by compulsion but willingly, not for dishonest gain but eagerly.

Revelation 7:17 for the Lamb who is in the midst of the throne will shepherd them and lead them to living fountains of waters. And God will wipe away every tear from their eyes.

One of Jesus “I Am” statements in the gospel of John is found in John 10:7: “Then Jesus said to them again, ‘Most assuredly, I say to you, I am the door of the sheep'” and again in v.9: “I am the door. If anyone enters by Me, he will be saved, and will go in and out and find pasture.” Because of verses such as these I am intrigued to see sheepfolds in biblical lands. 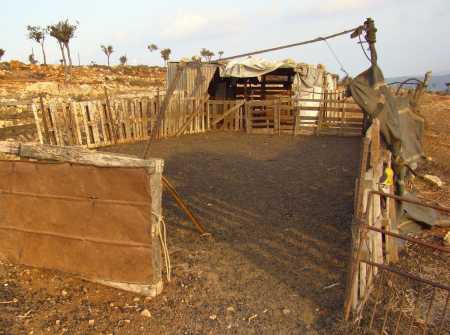 Sheepfold near Yodfat in Israel. Photo by Leon Mauldin.

Of course a door provides access. Inside is safety. Jesus is our access to the Father (John 14:6). In Him are all spiritual blessings (Eph. 1:3). The reference to going “in and out” is suggestive of going out for pasturage, and at the end of the day going in for rest. All of our spiritual needs are met in Christ.

‘Most assuredly, I say to you, he who does not enter the sheepfold by the door, but climbs up some other way, the same is a thief and a robber. 2 But he who enters by the door is the shepherd of the sheep. 3 To him the doorkeeper opens, and the sheep hear his voice; and he calls his own sheep by name and leads them out. 4 And when he brings out his own sheep, he goes before them; and the sheep follow him, for they know his voice. 5 Yet they will by no means follow a stranger, but will flee from him, for they do not know the voice of strangers.’ 6 Jesus used this illustration, but they did not understand the things which He spoke to them. 7 Then Jesus said to them again, ‘Most assuredly, I say to you, I am the door of the sheep. 8 All who ever came before Me are thieves and robbers, but the sheep did not hear them. 9 I am the door. If anyone enters by Me, he will be saved, and will go in and out and find pasture. 10 The thief does not come except to steal, and to kill, and to destroy. I have come that they may have life, and that they may have it more abundantly’ (NKJV).

Sheep within the sheepfold. Photo by Leon Mauldin.

These sheep within the sheepfold were photographed near Yodfat in Galilee. From this site one can see Cana in the distance.

Wikipedia has this info regarding 1st century Yodfat, a city referenced by the Jewish historian Josephus:

By the first century CE Yodfat had expanded to encompass an area of 50 dunams (13 acres). Its siege and subsequent destruction in 67 CE are described in Josephus Flavius’ The Wars of the Jews, his chronicle of the Great Jewish Revolt against the Romans. Led by future emperor Vespasian, three Roman legions — Legio V Macedonica, X Fretensis, and XV Apollinaris — besieged Yodfat, meeting strong Jewish resistance. After 47 days the city fell by treachery, and Josephus describes the death of 40,000 Jews and the enslavement of 1,200 women and children. Yodfat was razed and burnt on the first of the Hebrew month of Tammuz. While a few dozen remaining fighters committed suicide, Josephus managed to survive this pact and was captured by the Romans.

A lot of sheep and cattle are raised in Turkey. They take priority when the shepherd needs them to cross the road. Traffic just has to wait.

You can see Mt. Ararat in background. I love moments like this.

When traveling in the lands where biblical events occurred, I never tire of scenes of sheep with their shepherd. This is certainly true down from the slopes of Mt. Ararat, known as Greater Ararat, located in the mountain range where the ark came to rest.

Shepherds with sheep at Mt. Ararat. Photo by Leon Mauldin.

Mt. Ararat reaches 16,945 feet in altitude, and is snow-capped year round.

Mt. Ararat is situated near Dogubeyazit, Turkey. This peak is only 10 miles west of the border of Iran, seen in this photo: 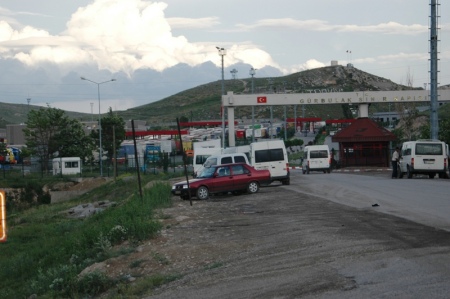 Turkey/Iran border. Mt. Ararat is 10 miles west (to our back) from this point. Photo by Leon Mauldin.

This kind of trip makes for some wonderful memories. Four of us, Ferrell Jenkins, David Padfield, Gene Taylor and myself, made this trip to eastern Turkey in 2007.

Check yesterday’s post for biblical references to the mountains (and kingdom) of Ararat. Ferrell Jenkin’s has made numerous posts on Ararat, including here.

Shepherds in a Dry and Thirsty Land

In our last post we mentioned the obvious fact that sheep need shepherds. When you consider the terrain and climate of the wilderness of Judea, it becomes even more clear that shepherds were/are needed to lead sheep to pasturage and water.

Over the years the sheep as well as goats carve out paths in the rugged terrain.

Scenes such as this below are basically unchanged from the days of the patriarchs thousands of years ago. 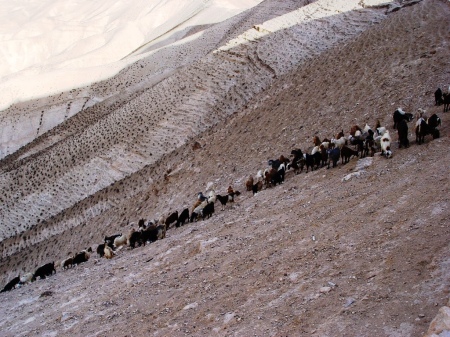