Last evening a grandson, along with my wife & me, were reading his daily Bible reading which was in 1 Samuel 13-15. Chapters 13-14 record a battle between Israel and the Philistines, which was initiated by the faith of King Saul’s son Jonathan. A site repeatedly mentioned in the text is that of Michmash. 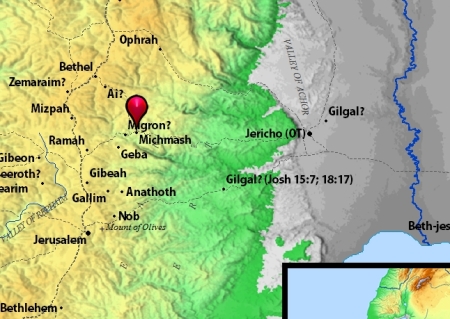 Michmash is about seven miles north and slightly east of Jerusalem. Consider how far into Israel’s territory the coastal Philistines had advanced at this point. Further, Israel’s forces were greatly outnumbered. The Philistines had 30,000 chariots and 6,000 horsemen, and “people as the sand which is on the seashore in multitude,” and were also “encamped in Michmash (1 Sam. 13:5). Jonathan had 1,000 men with him (at Gibeah at the point of 1 Sam. 13:2). Saul had only 2,000 men (ibid.) but as the chapter continues that number had shrunk down to a mere 600 men (v.15).

But Jonathan’s faith was not in numbers, but in YHWH. He told his armorbearer, “Come, let us go over to the garrison of these uncircumcised; it may be that the LORD will work for us. For nothing restrains the LORD from saving by many or by few” (1 Sam. 14:6). The two of them climbed up the steep pass to Michmash on hands and knees, attacked the Philistines, and “that first slaughter which Jonathan and his armorbearer made was about twenty men within about half an acre of land” (1 Sam. 14:14). The Philistine camp went into confusion. “So the LORD saved Israel that day” (v.23). Israel drove “back the Philistines that day from Michmash to Aijalon” (v.31). 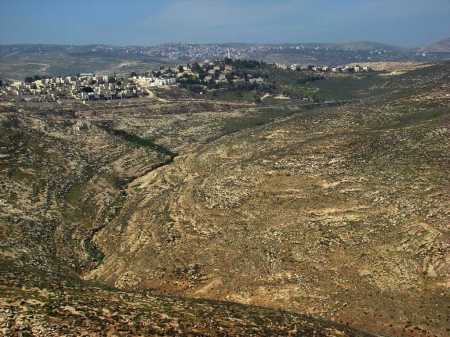 Michmash. Area of battle between Israel and Philistines. Photo by Leon Mauldin.

After we read the biblical narrative, I showed my grandson some photos of the Michmash area, such as the one here above, and was able to say that what we just read took place in this area. He responded, “Have they found any skeletons there?” “Wouldn’t it be cool if they found skeletons there?” Also, “Do they still fight battles there?”

While I don’t know of any skeletal remains, this area was the site of an important battle between Britain and the Turks during WWI. Major Vivian Gilbert, in his book The Romance of the Last Crusade, “relates the story of an unnamed brigade major who was reading his Bible while contemplating the situation against the Ottoman forces. The brigade major remembered a town by the name of Michmash mentioned somewhere in the Bible. He found the verses, and discovered that there was supposedly a secret path around the town. He woke the brigadier general, and they found that the path still existed and was very lightly guarded. The British forces used this path to outmaneuver the Ottomans, and so took the town” (Wikipedia, referencing pp. 183-186).

The use of maps and photos of biblical sites helps children (and the rest of us) to better visualize and understand the biblical events.

Recommended Resource: “With the Bible in the Israel Museum” DVD by Ferrell Jenkins

It is only in the last two years that photos have been permitted in the Israel Museum in Jerusalem. There are so many wings with so many artifacts, it is helpful to have some sort of guideline to serve as a starting point to make the most of a visit to the museum.

Ferrell Jenkins delivered a lecture entitled, “With the Bible in the Israel Museum” during the 2014 lecture series at Florida College, Temple Terrace, FL. In the lecture he selectively (because of so much to choose from) makes use of recent photos to deal with artifacts beginning with time of the patriarchs, continuing through Old Testament history (United Kingdom, Divided Kingdom, Captivity, Persian Period) and concluding with the Roman and Early Christianity. Included are numerous examples from various sites of Israel’s propensity to engage in idolatrous worship. Also there is insightful information on burial customs for different periods. 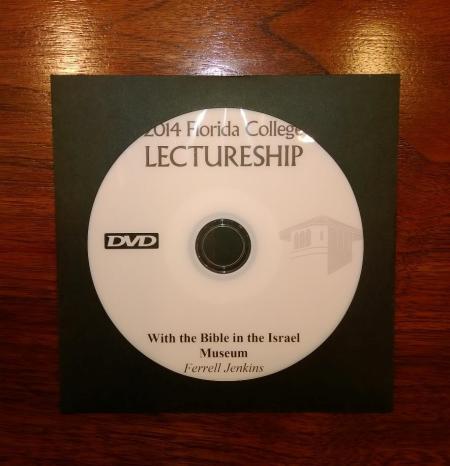 I recommend the DVD both as helpful to prepare for a visit to the museum, as well as to review and restudy if you have had opportunity already to go to.

You can place your order here with the FC Bookstore. Use the search box to enter keywords. Cost is $5.00 plus shipping.