At ETS in Atlanta this afternoon I heard Dr. Tremper Longman III, professor of Biblical Studies at Westmont College in Santa Barbara, California, and prolific author (including commentaries on the  Song of Solomon), lecture on the Song of Solomon. His view of the book is that it is an anthology of love poems, rather than a narrative with a plot; a collection of poems that both celebrate sexual love (within marriage) but also give warnings. It was an interesting lecture.

He read from Song of Solomon 4:3, which includes this compliment: “Your lips are like a scarlet thread, And your mouth is lovely. Your temples are like a slice of a pomegranate Behind your veil.” You might want to remember this text when you wish to praise your wife for her beauty. 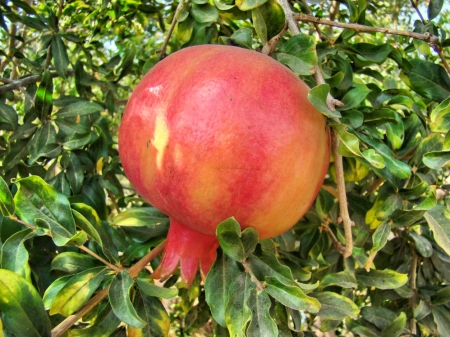 Pomegranate such as that referenced in Song of Solomon 4:3. Photo by Leon Mauldin.

This pomegranate orchard is located near biblical Lachish.

One of the geographical references in the Song of Solomon is found in 1:14, where the young woman/bride says, “My beloved is to me a cluster of henna blossoms In the vineyards of Engedi.” Pictured here is a beautiful waterfall at Engedi, located on the west side of the Dead Sea.

I have a previous post making a brief reference to the pomegranate here.

Assos, In the Steps of Paul

On Paul’s return trip on his 3rd Missionary Journey, after departing from Troas, he walked on to Assos and rejoined his traveling companions there. Today at noon (ETS meeting, ATL) Dr. Mark Wilson did a very informative presentation on that segment of Paul’s travel.

11 Now when he [Paul] had come up, had broken bread and eaten, and talked a long while, even till daybreak, he departed. 12 And they brought the young man [Eutychus] in alive, and they were not a little comforted. 13 Then we went ahead to the ship and sailed to Assos, there intending to take Paul on board; for so he had given orders, intending himself to go on foot. 14 And when he met us at Assos, we took him on board and came to Mitylene (Acts 20:11-14).

At the acropolis of Assos there are some well-preserved ruins of the temple of Athena.

Here is a view of the Acropolis:

While the distance from Troas to Assos as the crow flies is about 20 miles, Dr. Wilson pointed out that the Roman road on which Paul would have traveled would have been about 31 miles, and would have taken two days.

Mark said that Assos was one of his top 10 favorite places in Turkey to visit. I have to agree!

In ATL, attending meetings of the Near East Archaeological Society. Two of the eight sessions I attended today were on biblical Gezer. A great deal of archaeological work has been done here for the past several seasons, including the ancient tunnel/water system, with more yet scheduled.

There are several Old Testament references to this site. It was one of the cities King Solomon fortified:

Now this is the account of the forced labor which King Solomon levied to build the house of the LORD, his own house, the Millo, the wall of Jerusalem, Hazor, Megiddo, and Gezer. 16 For Pharaoh king of Egypt had gone up and captured Gezer and burned it with fire, and killed the Canaanites who lived in the city, and had given it as a dowry to his daughter, Solomon’s wife. 17 So Solomon rebuilt Gezer and the lower Beth-horon 18 and Baalath and Tamar in the wilderness, in the land of Judah, 19 and all the storage cities which Solomon had, even the cities for his chariots and the cities for his horsemen, and all that it pleased Solomon to build in Jerusalem, in Lebanon, and in all the land under his rule. (1 Kings 9:15-19).

Our photo here shows the standing stones at the high place at Gezer. 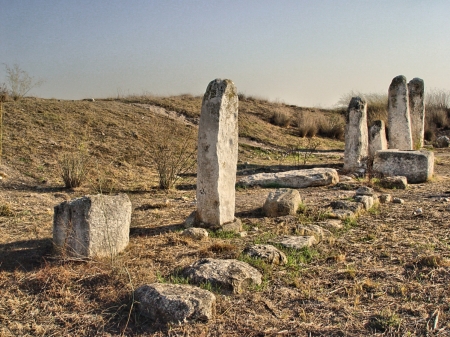 Gezer guarded the entrance into the Shephelah region. It is located approximately thirty kilometers northwest of Jerusalem. Gezer was strategically situated at the junction of the Via Maris, the international coastal highway, and the highway connecting it with Jerusalem through the valley of Ajalon.

It is fascinating to view the gates of Old Jerusalem!

The Damascus Gate is located on the north side of Jerusalem, so named because this would be the direction going out of Jerusalem to Damascus, ca. 150 miles NNW. The Jews call this gate the Shechem Gate, and the Arabs call it Bab el-Amud. 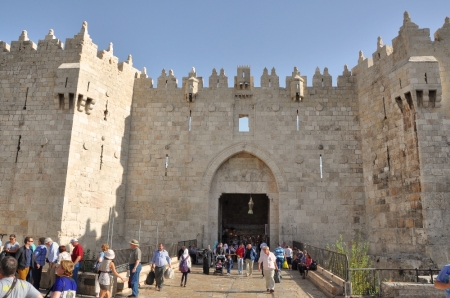 along the present north wall dramatically accents the spot that has been the main north entrance to Jerusalem for almost two millennia. R. W. Hamilton’s sounding here in 1937 and Basil Hennessey’s excavations in the 1960s; have revealed, below the modern entrance, layer upon layer of earlier gateways, reaching back through Arab, Crusader and Byzantine constructions to Roman Age foundations. The earliest certain construction here dates to Aelia Capitolina, the second to fourth-century C.E. city of Hadrian, but both Hamilton and Hennessey felt they found evidence that Hadrian’s gateway was built on foundations that went back to the Second Temple period. BAS Biblical World in Pictures. (2003).

Hadrian had built a triple-arched gateway to serve as entrance here. The eastern arch is well-preserved.

The Latin inscription above the keystone of the arch says, “…according to the decurians [the city council] of Col[onia] Ael[ia] Cap[itolina],” Hadrian’s designation for Jerusalem.