Delphi, located on the southern slopes of Mount Parnassos, was the site of the sanctuary of Apollo, dating back to about 800 BC. As the sanctuary developed, the Pythia were instituted there. The oracle of Delphi was widely sought by Greeks, foreigners, individuals and statesmen, including King Croesus of Lydia and King Midas of Phrygia.

Delphi was situated at was thought to be the center of the earth, and was thus designated the omphalos, or “navel” of the earth.

The Temple of Apollo was an elongated Doric peripteral temple, 4th century BC.

Among the artifacts displayed inside the Delphi Museum is the Sphinx of the Naxians (dating to ca. 560 BC). It stands over two meters tall. The marble sphinx was an offering from the inhabitants of Naxos. This mythical creature with the head of a woman, the chest and wings of a bird, and the body of a lioness, symbolized earthly divinity and heavenly power. The Sphinx stood on a 12.1 meters column that featured one of the first Ionic capitals, and was erected next to the Temple of Apollo in Delphi.

Treasury of the Athenians at Delphi . . . More Background for Esther

The restored treasury of the Athenians at Delphi:

The Athenian Treasury was a votive building in the form of a reduced scale temple, designed to hold the multitude of Athenian offerings to the Delphi oracle. The building was constructed entirely of Parian marble and had a Doric frieze decorated with 30 metopes. It is a distyle in antis building with a porch before the entrance to the cella, measuring 10 x 6 meters.

The metopes depicted mythological themes of Theseus, Heracles, and Amazons in high relief. It is believed that two Athenian sculptors carved the metopes, each representing a distinct style or generation: one from the Archaic period, and one from the Severe style of classical art (the transition from Archaic to High Classical art). The walls of the treasury were inscribed with various texts, among which are the hymns to Apollo which included melody notation (see below).

Several dates for its construction have been suggested (with Pausanias mentioning that it was built after the battle of Marathon), but it is widely accepted that its was created sometime between 510 and 480 BCE, a period framed by the founding of the Athenian democracy and the defining battle of Marathon. (http://ancient-greece.org/museum/muse-delphi-athenians.html)

Delphi of course is “home of the famous oracle of Delphi, known as the Pythia, and the Temple of Apollo, where the oracle presided” (Fant, Clyde E.; Reddish, Mitchell G.. A Guide to Biblical Sites in Greece and Turkey, Kindle Locations 1180-1181).

Our photo here shows the treasury at left center:

Treasury of the Athenians at Delphi. Photo ©Leon Mauldin.

Regarding the famous battle of Marathon, 490 BC, where the greatly outnumbered Greeks repelled and defeated the Persians, EyeWitnessHistory.com has the following info:

The battle of Marathon is one of history’s most famous military engagements. It is also one of the earliest recorded battles. Their victory over the Persian invaders gave the fledgling Greek city states confidence in their ability to defend themselves and belief in their continued existence. The battle is therefore considered a defining moment in the development of European culture.

In September of 490 BC a Persian armada of 600 ships disgorged an invasion force of approximately 20,000 infantry and cavalry on Greek soil just north of Athens. Their mission was to crush the Greek states in retaliation for their support of their Ionian cousins who had revolted against Persian rule.

Undaunted by the numerical superiority of the invaders, Athens mobilized 10,000 hoplite warriors to defend their territory. The two armies met on the Plain of Marathon twenty-six miles north of Athens. The flat battlefield surrounded by hills and sea was ideal for the Persian cavalry. Surveying the advantage that the terrain and size of their force gave to the Persians, the Greek generals hesitated.

One of the Greek generals – Miltiades – made a passionate plea for boldness and convinced his fellow generals to attack the Persians. Miltiades ordered the Greek hoplites to form a line equal in length to that of the Persians. Then – in an act that his enemy believed to be complete madness – he ordered his Greek warriors to attack the Persian line at a dead run. In the ensuing melee, the middle of the Greek line weakened and gave way, but the flanks were able to engulf and slaughter the trapped Persians. An estimated 6,400 Persians were slaughtered while only 192 Greeks were killed.

The remaining Persians escaped on their ships and made an attempt to attack what they thought was an undefended Athens. However, the Greek warriors made a forced march back to Athens and arrived in time to thwart the Persians. (http://www.eyewitnesstohistory.com/pfmarathon.htm)

In our title I suggested that these events give further background to the biblical book of Esther. In our post here we showed how in 480 BC, ten years after the Battle of Marathon, the Persian King Xerxes was building his forces to again attempt to subjugate Greece. The fact that Persia was still “smarting” after her humiliating defeat by Greece helps us to see the purpose and even urgency behind those opening verses of Esther (1:1-9), where Xerxes is meeting with officials from his 127 provinces, which ranged from India to Ethiopia.

The Cult of the Mother Goddess Cybele

In pagan mythology, Cybele was a nature goddess in Asia Minor, the great “mother of the gods,” the patroness of nature and fertility, and came to the western world from Phrygia. In the Ephesus Museum there is a display devoted to the cult.

On our recent trip to Greece at Delphi we saw the remains of a site devoted to the worship of Cybele.

Temple of Cybele at center. Ruins of temple of Apollo in behind. Photo ©Leon Mauldin.

At first this cult was not very popular in Rome, since it was accompanied by ecstatic excesses. By the beginning of the imperial era, however, its influence increased, especially when the emperor Claudius extended his patronage to it. From that time Roman citizens could become priests of Cybele. (The New Testament Milieu).

The worship of Artemis and Cybele in the process of time morphed into one.

Two remarkable aspects of Hellenistic religion are syncretism and the role of the mystery religions. When, as a result of Alexander the Great’s conquests, the city-state disappeared from Greece and the national borders were blurred, the frontiers between the domains of the various deities were also effaced. In Alexander’s world empire and in the large Hellenistic kingdoms of his successors, an enormous cultural and religious commingling gradually occurred. People came to know one another’s gods and accepted them as their own, because they no longer regarded them as alien forces. They were simply worshipped under other names and with different rites in the various countries. So the Greek goddess Artemis and Cybele of Asia Minor were equated: they were no longer regarded as two different goddesses, but as one and the same divinity with various names. (ibid.)

At Delphi we were especially interested in the Galillo Inscription. 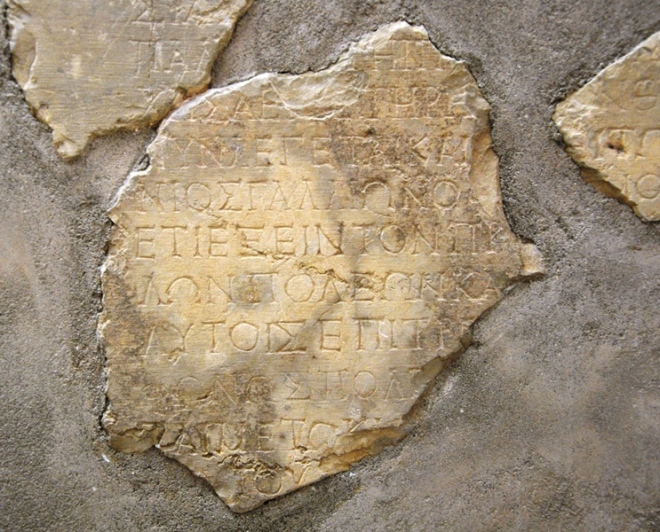 Thanks to an inscription that was found at Delphi concerning Gallio, the Roman governor (proconsul) in Corinth, the dates for this visit can be established.  Gallio seems to have taken office in July of 51 C.E. and served only only one year. Since Paul was forced to appear before Gallio due to a complaint lodged against him by the Jewish synagogue in Corinth, he likely arrived there in early 50 C.E. and departed in late 51 or in 52 C.E.

Today we are to make our way on up to Berea and then  to Thessalonica.