Pool of Siloam in Jerusalem

Today was a walking tour of Jerusalem. One of my favorite sites (among others) is the pool of Siloam, referenced in John 9. This site was excavated in late 2004. Jesus anointed with clay the eyes of the man born blind, and told him to go to this pool to wash his eyes. He did so, and he went away seeing. This miracle was evidence to validate Jesus’ claim that He was the light of the world (John 9:5). 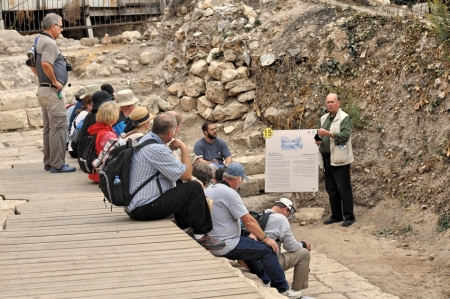 At the pool of Siloam, where the blind man received his sight (John 9). Photo by Zachary Shavin.

Now as Jesus passed by, He saw a man who was blind from birth. 2 And His disciples asked Him, saying, “Rabbi, who sinned, this man or his parents, that he was born blind?” 3 Jesus answered, “Neither this man nor his parents sinned, but that the works of God should be revealed in him. 4 “I must work the works of Him who sent Me while it is day; the night is coming when no one can work. 5 “As long as I am in the world, I am the light of the world.” 6 When He had said these things, He spat on the ground and made clay with the saliva; and He anointed the eyes of the blind man with the clay. 7 And He said to him, “Go, wash in the pool of Siloam” (which is translated, Sent). So he went and washed, and came back seeing.

This was one of seven miracles recorded in the Gospel of John. John’s stated purpose:

And truly Jesus did many other signs in the presence of His disciples, which are not written in this book; but these are written that you may believe that Jesus is the Christ, the Son of God, and that believing you may have life in His name. (John 20:30-31)

We have previously posted on Siloam here and here.

Click on image for larger view. Thanks for following our travels.