In the current BiblePlaces Newsletter (Vol 19, #1) Todd Bolen gives a brief history of his photo collections of Bible places, which has been now 20 years in the making. 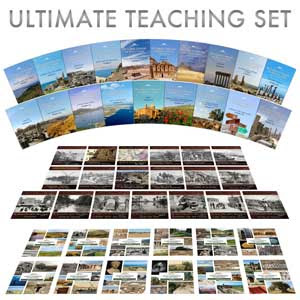 Collection of photos of Bible places, by Todd Bolen.

I have been making use of Dr. Bolen’s materials since 2003, which are useful not only because of the photos themselves, but sites are labeled and helpful notes are included. Photos are organized by country, specific regions, cities, (and much more) and PowerPoint presentations are included. I highly recommend these resources. To select and purchase, visit bibleplaces.com.

Ferrell Jenkins currently has a very nice (and informative) post on his blog here with more info re: this good material. It was Mr. Jenkins who introduced me to Dr. Bolen’s work.

Hadad, Name of a god and Syrian Kings

In the study of the Divided Kingdom there are many references to “Ben-hadad”, king of Syria. For example, I was just reading 2 Kings 6:24: “Afterward Ben-hadad king of Syria mustered his entire army and went up and besieged Samaria.”

The name “Ben-hadad” means “son of Hadad.” This is in reference to the god Hadad, god of Syria. In this mythology, he was the storm god, the god that provided rain.

There is a bust of Hadad housed in the Jordan Museum in Amman. 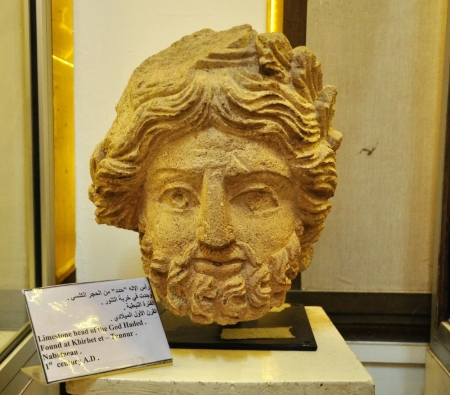 “Ben-hadad” is a dynastic name. There are three kings in the Bible record (in the numerous passages above) called “Ben-hadad.” A. H. Sayce wrote:

BEN-HADAD (בֶּן־הֲדַד, υἱὸς Ἁδερ, Benadad).—Three kings of Damascus of this name are mentioned in the OT.

Ben-hadad I., the son of Tab-rimmon, the son of Hezion (? Rezon), was bribed by Asa of Judah, with the treasures of the temple and palace, to attack Baasha of Israel while the latter was building the fortress of Ramah, and thereby blocking the Jewish high-road to the north. Asa urged that there had been alliance between his father and Tab-rimmon; but his gold was doubtless more efficacious in inducing Ben-hadad to invade the northern part of Israel, and so oblige Baasha to desert Ramah. Thereupon Asa carried away the stone and timber of Ramah, and built with them Geba and Mizpah (1 K 15:18–22).

Ben-hadad II. was the son and successor of Ben-hadad I. We have an account of his war with Ahab, and unsuccessful siege of Samaria, in 1 K 20. Thirty-two kings are said to have been his vassals or allies. He was, however, signally defeated at Aphek, and compelled to restore the cities taken by his father (1 K 20:34), as well as to grant the Israelites a bazaar in Damascus. At a later period Ben-hadad again besieged Samaria; but a panic fell upon his army, and they fled, believing that the king of Israel had hired against them ‘the kings of the Hittites and the kings of the Egyptians’ (2 K 7:6, 7). Having fallen ill, Ben-hadad afterwards sent Hazael to the prophet Elisha, who had come to Damascus, to ask whether he should recover; but the result of the mission was, that on the following day Hazael smothered his master and seized the crown (2 K 8:7–15).

Ben-hadad III. was the son of Hazael, and lost the Israelitish conquests that his father had made. Thrice did Joash of Israel ‘smite him, and recovered the cities of Israel’ (2 K 13:25). Sayce, A. H. A Dictionary of the Bible: Dealing with Its Language, Literature, and Contents Including the Biblical Theology (Vol. 1, p. 271).

The Lexham Bible Dictionary gives the following helpful information on the god Hadad regarding the significance of the land of Syria:

Although Hadad was worshiped in Mesopotamia, Hadad likely originated in Syria. In a late Assyrian deity-list, Hadad (dAd-du) is called dIM.MARki, the “storm-god of the west” (Huffmon, Amorite Personal Names, 156; Conn. 25, 16:16). In Syria, Hadad was probably an important deity from earliest times. Here Hadad was the son of Dagon, the Mesopotamian and West Semitic storm deity, and the equivalent of the great Sumerian storm-god Enlil (Green, Storm-God, 63–72, 167–68). Tablets discovered at ancient Mari associate the storm-god dIM with Hadad, who was revered in Syria more as a warrior than as a beneficent bringer of fertility. In the second millennium BC Hadad’s cult was centralized in ancient Yamhad (modern Aleppo), in Syria (Abou-Assaf, “Die Ikonographie”). Kelley, J. L. (2016). The Lexham Bible Dictionary.

I hope this information will be helpful to any who are undertaking a study of that complex biblical period known as the Divided Kingdom. Click images for larger view.