A book I have found helpful in understanding the background of Revelation is Imperial Cults and the Apocalypse of John: Reading Revelation in the Ruins, by Steven J. Friesen (pub Oxford). Friesen states:

The signal development, first manifest in the dedications of the Temple of the Sebastoi but reflecting broader trends in society was the use of neokoros as a technical title for a city with a provincial temple of the emperors. The power of this innovation was explosive. In a matter of years it changed the public rhetoric of empire in Asia. Within a century it had transformed the discourse of Roman imperialism in the eastern Mediterranean. From the late first century onward, the most prestigious self-designation that could be employed by a city in Asia was neokoros, indicating the presence of a provincial temple where the emperors and their relatives were worshipped (p.150).

Neokoros literally means one who sweeps and cleans a temple; one who has charge of a temple, to keep and adorn it. It came to designate a city which maintained a temple for imperial worship. It is a historical fact that cities competed for this “honor.” 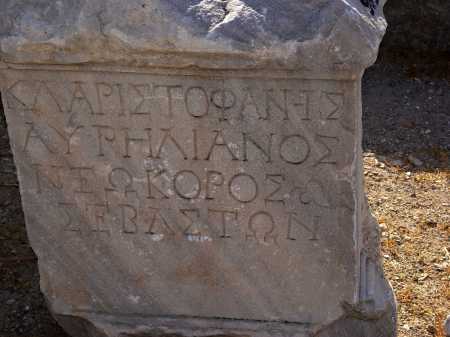 This inscription found in biblical Smyrna (see Revelation 2:8-11; Smyrna was one of the seven churches of the Roman province of Asia addressed in Rev. 2-3), in lines 3 and 4 designates Smyrna as neokoros of Sebaston [Greek equivalent to Latin Augusti]. Dr. David McClister says, “This inscription is known in the scholarly literature as Smyrna 162. It is an honorary inscription for Cl(audius) Aristophanes Aurelianus,  dated AD 193/235” [lines 1 and 2), and further, “It appears to me to have been a statue base honoring this individual for his leadership in the emperor cult.”