Cities of the Decapolis

I’m currently presenting a visualized survey of the Bible, with tonight’s lesson dealing with the Life of Christ. Following Jesus’ Galilean Ministry, He pursued a plan to invest more time alone with the Apostles, preparing them for the great work they were to do. This period is known as the Retirement Ministry, “retiring” from the crowds to be with the apostles. One region Jesus traveled during this time was the Decapolis. “Again He went out from the region of Tyre, and came through Sidon to the Sea of Galilee, within the region of Decapolis” (Mark 7:31). This largely Gentile area was comprised of ten cities (hence the name) which were given autonomy by Rome.

One of the cities of the Decapolis was Jerash (Gerasa). 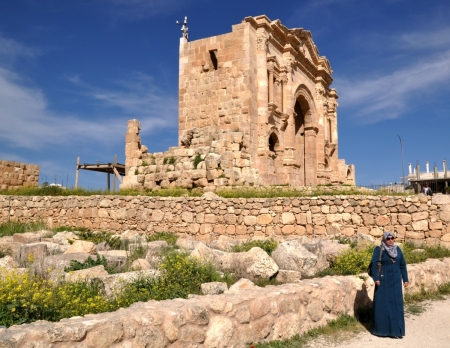 Hadrian Gate at entrance to Jerash, one of the cities of the Decapolis. Photo ©Leon Mauldin.

Here is a view down the Cardo of Jerash.

Another city of the Decapolis was Hippos. From here you can see the Sea of Galilee.

Back to our text of Mark 7:31. Here was the site of one of Jesus’ many miracles, which gave proof of His deity:

Again He went out from the region of Tyre, and came through Sidon to the Sea of Galilee, within the region of Decapolis. 32 They brought to Him one who was deaf and spoke with difficulty, and they implored Him to lay His hand on him. 33 Jesus took him aside from the crowd, by himself, and put His fingers into his ears, and after spitting, He touched his tongue with the saliva; 34 and looking up to heaven with a deep sigh, He said to him, “Ephphatha!” that is, “Be opened!” 35 And his ears were opened, and the impediment of his tongue was removed, and he began speaking plainly. 36 And He gave them orders not to tell anyone; but the more He ordered them, the more widely they continued to proclaim it. 37 They were utterly astonished, saying, “He has done all things well; He makes even the deaf to hear and the mute to speak.” (Mark 7:31-37).