In the tumultuous days of the Divided Kingdom, King Baasha (Israel) fortified Ramah, a border city (on the Israel/Judah border) on the main north-south road, as well as a location which controlled the route westward to the sea. King Asa (Judah) retaliated. Here is the story:

And Baasha king of Israel came up against Judah, and built Ramah, that he might let none go out or come in to Asa king of Judah.  Then Asa took all the silver and gold that was left in the treasuries of the house of the LORD and the treasuries of the king’s house, and delivered them into the hand of his servants. And King Asa sent them to Ben-Hadad the son of Tabrimmon, the son of Hezion, king of Syria, who dwelt in Damascus, saying,  “Let there be a treaty between you and me, as there was between my father and your father. See, I have sent you a present of silver and gold. Come and break your treaty with Baasha king of Israel, so that he will withdraw from me.”  So Ben-Hadad heeded King Asa, and sent the captains of his armies against the cities of Israel. He attacked Ijon, Dan, Abel Beth Maachah, and all Chinneroth, with all the land of Naphtali (1 Kings 15:17-20).

Judah’s King Asa gave a “present” to Ben-Hadad, king of Syria (Aram), that he would attack Baasha. The word for “present is šōḥad, meaning, “Bribe, present, gift, reward, gratuity, inducement” (TWOT, #2359). Related passages would include Exodus 23:8, “You shall not take a bribe, for a bribe blinds the clear-sighted and subverts the cause of the just” (NASB). Isaiah denounced the leaders of Judah with the words, “Your princes are rebellious, And companions of thieves; Everyone loves bribes, And follows after rewards. They do not defend the fatherless, Nor does the cause of the widow come before them” (Isa. 1:23, NKJV). šōḥad is the word used to describe the bribe money that King Ahaz of Judah sent to Tiglath-pileser in a scheme like that of our present text, as he bribed the Assyrian king to attack Pekah (Israel) and Rezin (Aram/Syria) (2 Kings 16:8).

Syria’s king Ben-Hadad was very willing to take the money from Asa; he was being paid to do something he wanted to do! From his perspective he had everything to gain and nothing to lose. So as our text relates, “He attacked Ijon, Dan, Abel Beth Maachah, and all Chinneroth, with all the land of Naphtal” (1 Kings 15:20). This gave Syria a great advantage; this gave them a clear route to the Mediterranean Sea.

For Asa, from a military standpoint, his actions were successful; it was good military strategy for the short term. But from Chronicles we learn that God was displeased. He sent the prophet Hanani to Asa and rebuked him because you “have not relied on the LORD your God” (2 Chron. 16:7). The prophet went on to say, “For the eyes of the LORD run to and fro throughout the whole earth, to show Himself strong on behalf of those whose heart is loyal to Him. In this you have done foolishly; therefore from now on you shall have wars” (v.9).

Back to our opening text of 1 Kings 15, one of Israel’s northern cities successfully attacked by Ben-Hadad was Abel-beth-maacah.

Here is a photo of Abel-beth-maacah. The large tel, at center.

Recent excavations have been conducted at Abel-beth-maacah. An interesting artifact housed in the Israel Museum in Jerusalem is the head of a statue depicting a king, discovered in 2017 in a fortress at the summit of the tel. According to the museum info, this head is dated to the 9th century BCE, which would approximate the time of our 1 Kings 15 text (Asa r.911-870 BC; Baasha r.909-886 BC). (By their mention of King Ahab of Israel. r.874-853 BC, the IM is dating this artifact just slightly after the events of 1 Kings 15 re: Asa and Baasha). 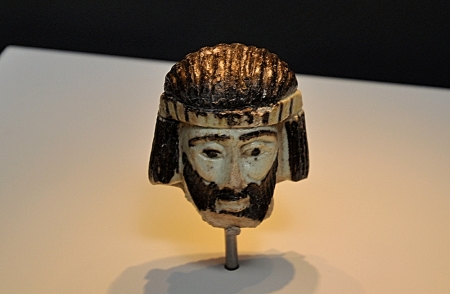 Head of a stature depicting a king excavated at Abel-beth-maacah. Photo ©Leon Mauldin.

The placard states, “Its elegant style leaves no doubt that it portrays a distinguished personage, probably a king, but since it was found of the border of three different ancient kingdoms, we do not know whether it depicts King Ahab of Israel, King Hazael of Aram Damascus, or King Ithobaal of Tyre, rulers known from the Bible and other sources. Additional questions regarding the statues’s material and style only heighten the mystery.”