In the Steps of Paul: Along the Appian Way

Yesterday (Sunday) between church services in Rome (AM) and Ciampino (PM), we had the opportunity to see portions of the Appian Way. This road was one of the earliest and most important Roman roads of the ancient republic, connecting Rome to Brindisi, in southeast Italy. It was constructed in the years 312–264 BC.

When Paul was traveled to Rome as a prisoner as recorded in Acts 28:11-16, he was met by Roman Christians who heard he was coming. They then walked with him back to Rome. This land portion of the journey was on this road, the Appian Way. In this photo you can see the original paving stone, scored by chariot wheels. Then in the upper portion of the road you can see reconstruction pavement.

Near this area of our photo there were burial sites, such as that depicted here.

A burial site along the Appian Way. Photo by Leon Mauldin.

Aquileia is located in Friuli-Venezi-Giulia (Udine Province) Italy, and is listed as a UNESCO site. Construction of the Basilica began in the years following AD 313 and continued over the years through the 14-15th centuries.

Inside are 760 square meters of mosaics of what is said to be “the largest Paleo-Christian mosaic of the western world.” These date to the late 4th century AD. The mosaic was covered by other flooring over the centuries, and was not uncovered until the years 1909-1912.

Of the many scenes depicted, I wanted to share this photo of the “Good Shepherd.” The on-site brochure states, “Christ is portrayed as a beardless young man bearing the lost lamb upon his shoulders. In one hand he holds the syrinx (the shepherds’ flute), symbol of the gentleness he takes care of his flock with.”

Christ the Good Shepherd. A scene from the mosaic floor. Photo by Leon Mauldin.

I was also impressed with the baptistery in which immersion took place.

Baptistery at the basilica of Aquileia. Photo by Leon Mauldin.

Here is a view inside the baptistery. 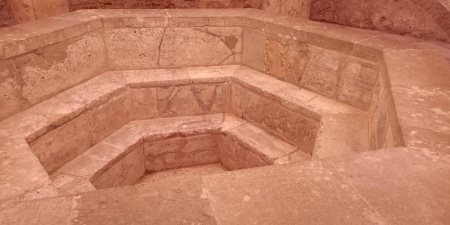 A view looking down inside the baptistery. Photo by Leon Mauldin.

I recently posted on the Good Shepherd motif here.