From an entry entitled, “Weapons” in the Harper’s Bible Dictionary we read:

As in the modern world, advancements in ancient technology were quickly adapted for use in instruments of war. One of the most important steps in the history of weapons was the development of carburized iron, a phenomenon that occurred in the eastern Mediterranean toward the end of the second millennium B.C., but earlier improvements in metallurgy (i.e., the production of copper and bronze) had been applied to arms production for nearly two thousand years before the Iron Age. Naturally, the shape, size, and overall durability of dagger and sword blades and spearheads and arrowheads were affected by such improvements in copper, bronze, and iron technology. Another important weapon that improved over time was the chariot, whose speed and maneuverability were increased by changes in design and construction materials, including metals. Other major steps in the development of ancient weaponry include the invention of the composite bow, piercing battle-ax, “Corinthian” helmet, and siege engines (pp. 1123-1124).

The Metropolitan Museum in NY has several such helmets on display.

This Grecian helmet, made of bronze and dating back to 7th-6th century BC, put me in mind of some biblical texts:

–Isaiah 59:17:  He put on righteousness like a breastplate, And a helmet of salvation on His head; And He put on garments of vengeance for clothing And wrapped Himself with zeal as a mantle. (Reference here is to the Lord, YHWH).

–Ephesians 6:17: And take THE HELMET OF SALVATION, and the sword of the Spirit, which is the word of God. The above Isaiah text provides background for this Ephesians passage. The New American Standard Bible uses all caps to indicate a quotation from the OT. The helmet is a vital part of the Christian’s armor listed in Eph. 6:10-17.

I believe I’ll keep my helmet on!

The god Horus, symbolized by the falcon, had a very close relationship with the Pharaoh in Egyptian mythology. Pharaoh was believed to be the god-king, and “was regarded as the god Horus incarnate” (Bible and Spade 1990, vol. 3, no. 4, p. 111).

Our photo shows the Egyptian god Horus protecting King Nectanebo II. He reigned during the Late Period, Dynasty 30, 360-343 BC. This statue is said to be from Heliopolis, Egypt.

The king holds a sword in his left hand. This statue is on view in Gallery 128 in the Metropolitan Museum of Art, New York. Click image for larger view.

During Egypt’s New Kingdom Period, in the 18th dynasty, Amenhotep III (ca. 1390-1352 BC) commissioned hundreds of statues of the goddess Sakhmet for his mortuary temple in western Thebes. These statues were intended as monumental prayers to appease the goddess and guarantee peace and health. 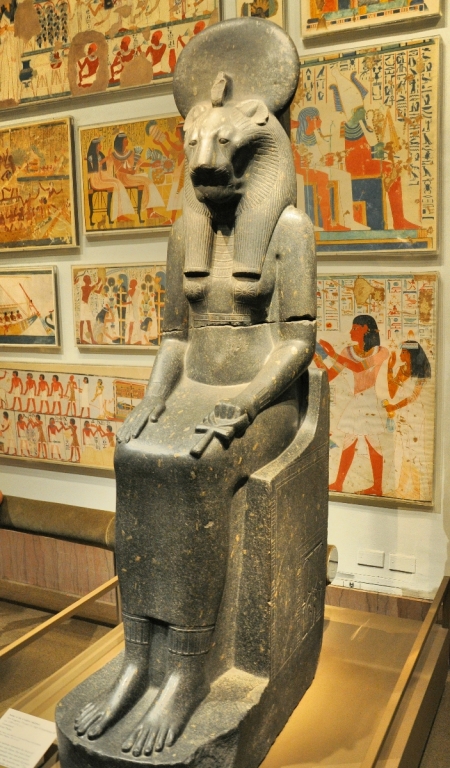 “The goddess Sakhmet represents the forces of violence, disaster, and illness. Her lion’s head expresses her potentially fierce and destructive character and, appropriately, her ancient Egyptian name, Sakhmet, means ‘the powerful one.’ The sun disk on her head identifies the goddess as the daughter of the sun god Re” (from museum placard).

This puts me in mind of what YHWH said prior to the 10th of the ten plagues of Egypt: “and on all the gods of Egypt I will execute judgments: I am the LORD” (Ex. 12:12).