The horizontal cluster of white buildings in the upper center of photo mark the spot of ancient Shunem, the site of the Philistine encampment referenced in our text. 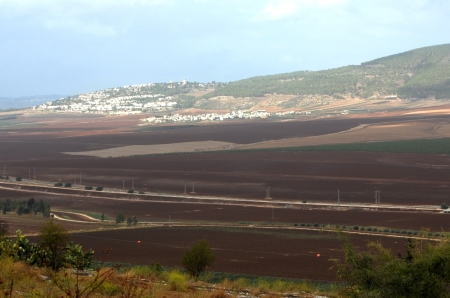 Saul and the forces of Israel were encamped at Gilboa. This view of Gilboa is from Beth Shan.

Gilboa as seen from Beth Shan. Photo by Leon Mauldin.

As the 1 Samuel narrative continues, the next chapter states, ” Now the Philistines gathered together all their armies to Aphek, while the Israelites were camping by the spring which is in Jezreel” (29:1) We have previously posted photos/articles on Aphek here and here, where the Philistines at this time gathered all their armies. At Jezreel one can see the spring mentioned here in 1 Sam. 29:1. 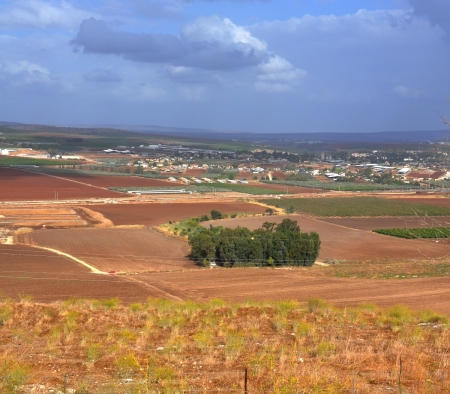 Saul and his three sons (including David’s best friend Jonathan) died at Mt. Gilboa, a great victory for the Philistines. It was a sad day for Israel:

8 It came about on the next day when the Philistines came to strip the slain, that they found Saul and his three sons fallen on Mount Gilboa. 9 They cut off his head and stripped off his weapons, and sent them throughout the land of the Philistines, to carry the good news to the house of their idols and to the people. 10 They put his weapons in the temple of Ashtaroth, and they fastened his body to the wall of Beth-shan. (1 Sam. 31:8-10).

Beth Shan, where the Philistines nailed the bodies of Saul & sons. Photo by Leon Mauldin.

These photos may be used along with maps to show where the events of 1 Sam. 28-31 transpired. Click on images for larger view.

1 Samuel 18-31 details an extensive period of David’s life when his major concern was escaping King Saul’s efforts to kill him. At one point David left Israel’s territory to live in Philistia, where he and his men were given the city of Ziklag. While David was away, Amalekites invaded the South including Ziklag (1 Sam. 30:1). They burned the city, and took the women and children as captives. Upon returning and learning what had transpired, David and his men pursued. The text states:

So David went, he and the six hundred men who were with him, and came to the Brook Besor, where those stayed who were left behind. 10 But David pursued, he and four hundred men; for two hundred stayed behind, who were so weary that they could not cross the Brook Besor (1 Sam. 30:9-10). 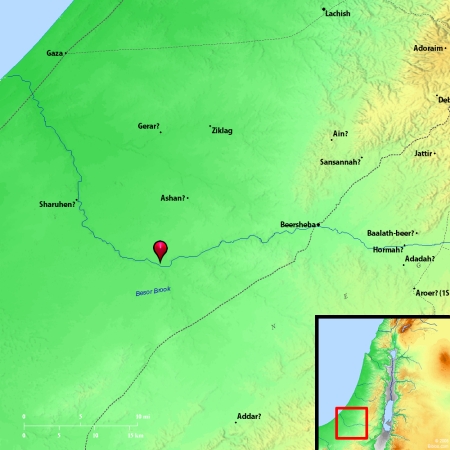 The Brook Besor, mentioned in the text, has been identified as Wâdī Ghazzleh, and empties into the Mediterranean south of Gaza.

The brook is mostly filled with reeds.

Here is a view from the tel at Besor. The green vegetation in a desert area is always an indication of water. 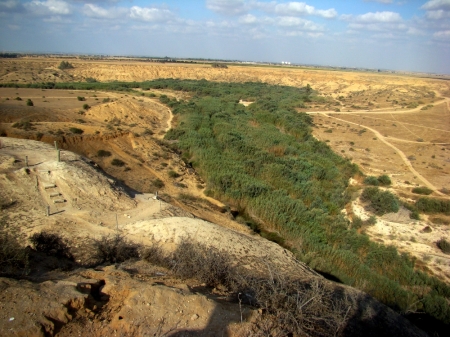 The text goes on to state that David and the 400 men who were able to pursue were successful in their recovery of persons and possessions (1 Sam. 30:11-20). Upon returning to the Brook Besor, here’s what happened:

Now David came to the two hundred men who had been so weary that they could not follow David, whom they also had made to stay at the Brook Besor. So they went out to meet David and to meet the people who were with him. And when David came near the people, he greeted them. 22 Then all the wicked and worthless men of those who went with David answered and said, “Because they did not go with us, we will not give them any of the spoil that we have recovered, except for every man’s wife and children, that they may lead them away and depart.” 23 But David said, “My brethren, you shall not do so with what the LORD has given us, who has preserved us and delivered into our hand the troop that came against us. 24 “For who will heed you in this matter? But as his part is who goes down to the battle, so shall his part be who stays by the supplies; they shall share alike.” 25 So it was, from that day forward; he made it a statute and an ordinance for Israel to this day (1 Sam. 30:21-25).

It is exciting as well as educational to see such landmarks as the Brook Besor that are mentioned in the biblical text.