Timnah and the Samson Narrative

Timnah was allotted to the tribe of Dan (Josh. 19:43; Thimnathah, KJV). Some scholars identify it with Tell el-Batashi, about six kilometers (four miles) northwest of Beth Shemesh. At Timnah Samson married a Philistine woman and later told her his riddle of the lion and the honey (Judges 14). 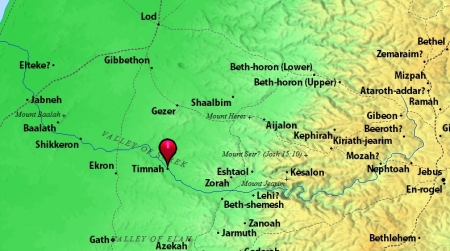 We had the opportunity while in Israel last month to see Timnah. You can see the tel in center of photo. 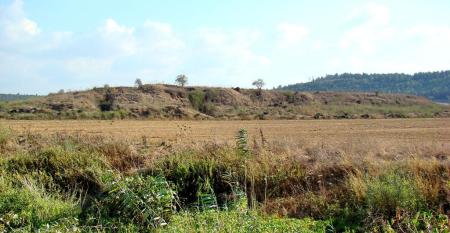 Timnah. Tel is in center. Photo by Leon Mauldin.

Samson was one of Israel’s judges in the biblical period usually designated “judges,” which preceded Israel’s having a king. Some of the other judges led an army to deliver Israel; Samson WAS the army.

But regarding Timnah, the text reads,

Samson went down to Timnah, where a Philistine girl caught his eye. 2 When he got home, he told his father and mother, “A Philistine girl in Timnah has caught my eye. Now get her for my wife.” 3 But his father and mother said to him, “Certainly you can find a wife among your relatives or among all our people! You should not have to go and get a wife from the uncircumcised Philistines.” But Samson said to his father, “Get her for me, because she is the right one for me” (Judges 14:1-3, NET).

It was here at Timnah (at the vineyards) that a young lion roared against Samson, and he killed it with his bare hands (vv. 5-6).  The verses that follow tell of bees making honey in the carcass of the lion which Samson ate and shared with his parents. He omitted to tell them the source of the honey.

Samson told a riddle which would require the wedding guests (30) at Timnah to each give him a set of clothing. The men could not figure out his riddle,  “Out of the one who eats came something to eat; out of the strong one came something sweet” (v.14). They threatened Samson’s wife who finally got the answer from Samson (the lion).  Samson was angry with his wife, and went home to his parents.  Meanwhile his father-in-law gave Samson’s wife to his “best man” (v. 20 ESV, NET).

Not knowing what had happened Samson went back to Timnah to “make up” with his wife. Upon learning of this new set of circumstances,

4 Samson went and captured three hundred jackals and got some torches. He tied the jackals in pairs by their tails and then tied a torch to each pair. 5 He lit the torches and set the jackals loose in the Philistines’ standing grain. He burned up the grain heaps and the standing grain, as well as the vineyards and olive groves. (Judges 15:4-5, NET).

The biblical narrative continues, with subsequent retaliation both on the part of the Philistines as well as Samson.

We are glad to see such Bible places as Timnah, as such sites provide the geographical setting for the events of Scripture.

This entry was posted on Friday, October 14th, 2011 at 9:43 PM and is filed under Bible History and Geography, Bible Study, Israel, Old Testament, Travel. You can follow any responses to this entry through the RSS 2.0 feed. You can leave a response, or trackback from your own site.