Using the early date of the Conquest (1407/6 BC) as the approximate time that the tabernacle would have been erected at Shiloh (Josh. 18:1), and accepting W.F. Albright’s dating of Shiloh’s destruction at 1050 BC, that would mean that the tabernacle stood at that site for about 350 years. As we saw in our previous post, the biblical text makes reference to Shiloh’s destruction as a well-known fact but does so without recording the event itself. Most likely it was the Philistines who followed through with the destruction of the sacred site after the capture of the ark as recorded in 1 Sam. 4.

Later the Psalmist would write,

55 He drove the nations out from before them; he assigned them their tribal allotments and allowed the tribes of Israel to settle down. 56 Yet they challenged and defied the sovereign God, and did not obey his commands. 57 They were unfaithful and acted as treacherously as their ancestors; they were as unreliable as a malfunctioning bow. 58 They made him angry with their pagan shrines, and made him jealous with their idols. 59 God heard and was angry; he completely rejected Israel. 60 He abandoned the sanctuary at Shiloh, the tent where he lived among men. 61 He allowed the symbol of his strong presence to be captured; he gave the symbol of his splendor into the hand of the enemy (Psalm 78:55-61, NET).

In our photo the proposed location of the tabernacle at Shiloh may be seen. Note the small rectangular area in upper center. 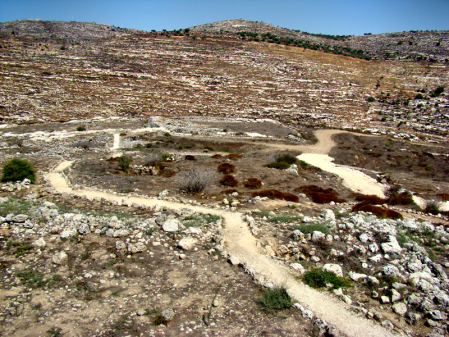 Here is a close up:

Shiloh. Area in shape of rectangle is proposed site of the tabernacle. Photo by Leon Mauldin.

Shiloh was central to the nation of Israel for several centuries.

This entry was posted on Thursday, September 22nd, 2011 at 8:42 PM and is filed under Bible History and Geography, Bible Study, Israel, Old Testament, Shiloh. You can follow any responses to this entry through the RSS 2.0 feed. You can leave a response, or trackback from your own site.