Made in China, Repaired in Israel

I think there’s something to be said for taking seriously matters of import, while one doesn’t take himself too seriously. That being said, Ferrell Jenkins and I seriously wanted to see the tel of Adullam, as well as the cave (he posted on that earlier this month here).

The biblical narrative of 2 Sam. 23:13-17 has impressed me with the concept of loyalty and devotion. At the cave of Adullam (which David was using as his stronghold) three of David’s men heard him verbalize how he would like a drink of water from the well of his home town Bethlehem. The problem was that the Philistines had a garrison posted there. That did not matter. Those three left the cave and “broke through the camp of the Philistines, drew water from the well . . . and took it and brought it to David” (v.16). David was so overcome with emotion and gratitude that he could not drink it, but instead poured it out as an offering to YHVH (vv.16-17).

These men loved David so much that they were willing to risk everything, including their lives, to do what they perceived that David wanted.  I’ve often said that if we loved the Lord just about half as much as they loved David, we’d be well on our way in the right direction.

Those concepts I take seriously. But back to the part about not taking yourself too seriously. Of course I wanted to go inside the cave, which we did. I had on a brand new pair of pants. In the process of bending around and getting in position to take photos from inside the cave I heard an unmistakable ripping sound. It wasn’t a neat rip. It wasn’t even in the seam. It was say from the knee all the way up to the zipper. What do you do in a situation like that? By the way, Adullam was to be our first stop of the day.

Another question, what are the odds of finding a sewing machine at Adullam or nearby? 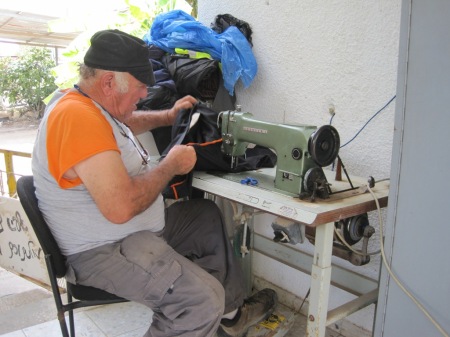 Emergency Pants Repair at Adullam. "Made in China, Repaired in Israel." Photo by Ferrell Jenkins.

Our driver/guide we had secured for this excursion which required 4-wheel drive, Daphna (see above reference in Jenkin’s post), helped secure my dignity. Among the equipment possessed by Haelah Desert Tours was indeed a sewing machine, and there was also a very helpful worker who knew how to use it. As I waited inside the (thankfully unoccupied) office, Mr. Jenkins recorded the moment with the above photo.

Things like that give you something to smile about (after it’s over), and also to remember about your visit. I could never forget Adullam, especially not now.

Another BTW, Mr. Jenkins said that for me to be a good steward it would be essential to take those pants back for a refund. I complied. Actually my wife did, but she got a full refund for the pants that were made in China and repaired in Israel.

On a personal note, I’m glad and thankful to God to be making this post tonight. I’ve had a  two-day hospitalization, due to what turned out to be a very low potassium level and a med that needed changing, but all seems well and progressing at present.

I’m looking forward, the Lord willing, to being with the Southside church of Christ in Pasadena, TX, for a 5-day meeting, Mon-Fri. This will be my Visualized Survey of the Bible, which emphasizes the theme of the Bible, and narrates the record in survey form from Genesis to Revelation. I am thankful for such opportunities. In such lessons we make use of numerous photos of the Bible lands, showing the geographical context for the events of Scripture.