From ancient times the role of the scribe has been an important one.  The Bible has many references to Jewish scribes.  In the Old Testament, Ezra was described as “a skilled scribe in the Law of Moses” (Ezra 7:6).  He was a man whom God used for good in the biblical period of the post-captivity return and rebuilding.

Many of the New Testament references to scribes are not flattering. In fact, the scribes received some of Jesus’ sternest rebukes (see Matthew 23).

Our photo today features a statue of an Egyptian scribe by name of Mitri, of Egypt’s 6th’s dynasty of the Old Kingdom (2345-2181 B.C.). Such men had to be very efficient at writing hieroglyphs quickly, and also be well-educated in mathematics. 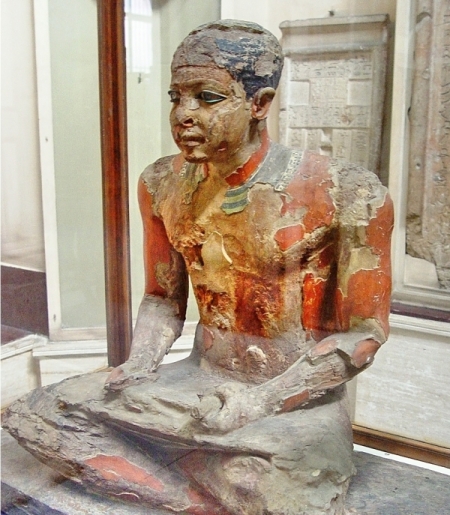 I especially value such photos as this one because photography is no longer permitted in the Egyptian Museum.

The website Egyptopia has the following interesting information on Mitri the Scribe:

Mitri was one of the prominent figures in the 6th Dynasty who acquired numerous positions as depicted on the base of this statue including: Administrator of the Nome and Great One of the ten of Upper Egypt and Priest of Maat.

This statue of Mitri as a scribe was found in his tomb in Saqqara among other statues for him and his wife in various positions. This wood with painted stucco is used to indicate the intellectual abilities of the deceased although he did not occupy that post.

Mitri is depicted in the customary posture of the scribe in ancient Egypt with crossed legs and a papyrus role on his lap. The eyes are set in limestone and transparent stone and ringed with copper attract the attention of the observer to Mitri’s calm gaze and become the focal point of the whole sculpture. The body is colored with dark ocher color and the monotony of the color is broken by the colorful necklace around his neck.

Such scribes would have written on papyrus, “paper” made from the papyrus reed, shown in photo below. 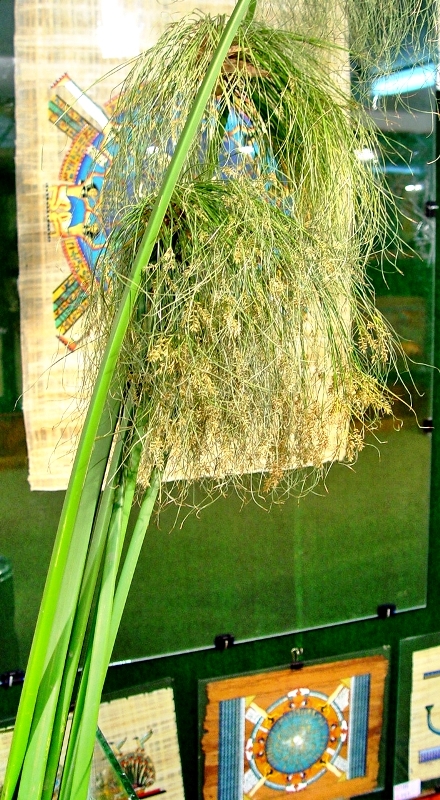 Papyrus Reed, from which papyrus was made. Photo ©Leon Mauldin.

This entry was posted on Thursday, September 30th, 2010 at 11:41 AM and is filed under Bible History and Geography, Bible Study, Egypt. You can follow any responses to this entry through the RSS 2.0 feed. You can leave a response, or trackback from your own site.

One Response to Mitri, the Egyptian Scribe