Last March our group tour included the Mediterranean islands of Patmos, Rhodes and Crete, and we have made posts of photos w/info for each of these.  Additionally, the island of Santorini, also know as Thira,  was included.

Santorini is grouped with the Cyclades islands in the Aegean which are essentially the mountain peaks of the sunken continent of Aegeis. The word “Cyclades” is derived from the word Delos, the sacred island of the ancient Greeks. 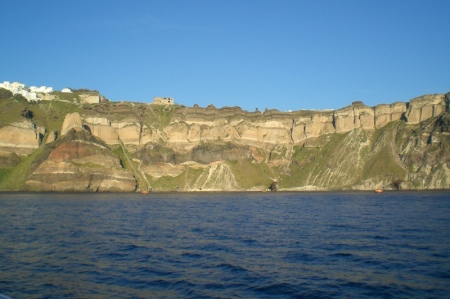 Approach to Santorini, one of the Greek Islands. Photo ©Leon Mauldin.

The Cyclades are geographically positioned as a bridge between East and West, and accordingly played an important role in the history of the Greek World.  Civilization is traced back to the Bronze Age, the most important of which was located at Akrotiri on Santorini. Ruins in excellent condition have been preserved, due to the eruption of the volcano of Thera (ca. 1500 BC), which covered the site with a thick layer of ash.  Evidence abounds of an advanced culture, assimilating that of the Minoans of Crete.

Santorini is a unique sight. Its cliffs tower out of the sea, capped off by whitewashed buildings.  At center of photo you can see towers for the sky-lift; also the zig-zag road for walking, or riding donkeys. 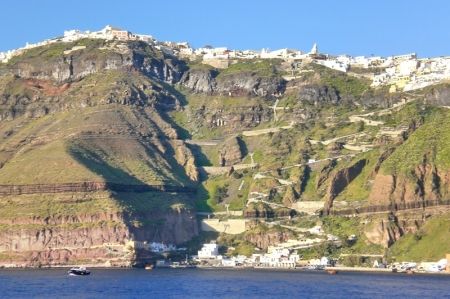 This is the view at sunset: