We continue today with yesterday’s topic of Memphis of Egypt, a city which is specifically mentioned in biblical prophecy in such texts as Ezekiel 30:13. We saw that passage contextually foretold of the destruction of the images of the gods there.  Note that some translations will render the city’s name Noph.

Another biblical reference to Memphis is that of Jeremiah 44:1ff.  Jeremiah had been taken by force to Egypt after the 586 B.C. Babylonian deportation by rebellious Jews.  The Lord used Jeremiah as His faithful spokesman to “the Jews living in the land of Egypt, those who were living in Migdol, Tahpanhes, Memphis, and the land of Pathros…”

In yesterday’s post we showed the solid alabaster sphinx in Memphis.  Today’s photo gives some sense of scale.  This small area of Memphis is all that can be seen of antiquity of what was once one of the most important cities in the world.

There was Egyptian police presence in Memphis.  We found them to be quite friendly.

One important monument in Memphis is the fallen colossus of Ramesses II.  Ramesses II had a lengthy reign (1279-1213 B.C.), and he left his monuments and inscriptions all over the land.  No one has accused him of humility or undue modesty! 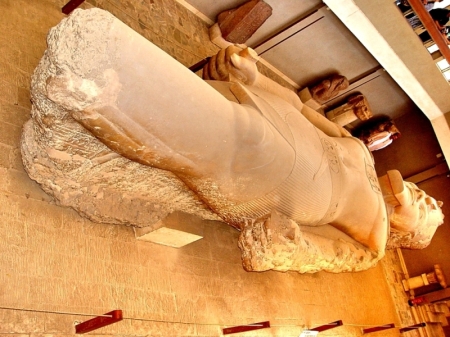 At Memphis you can see date palm trees such as the one in our photo.  You could say this tree had lots of dates!

As we say frequently, the Bible is true; it is genuine history; it is not fiction. When it mentions places, such as Memphis/Noph, they are real places where real people lived, for better or worse!

This entry was posted on Tuesday, September 28th, 2010 at 5:24 PM and is filed under Bible History and Geography, Bible Study, Egypt, Travel. You can follow any responses to this entry through the RSS 2.0 feed. You can leave a response, or trackback from your own site.