Hazor is first mentioned in the Bible in Josh. 11 in the days of the conquest under Joshua. Having conquered the central and then southern regions of Canaan, the victory of Hazor established Israel’s “toehold” in the north, for as Josh. 11:10 explains, “Joshua turned back at that time and took Hazor, and struck its king with the sword; for Hazor was formerly the head of all those kingdoms.” Or, as the NET renders the text, “for Hazor was at that time the leader of all these kingdoms.” As such, it was the head of a confederation of several Canaanite cities in the battle against Joshua & Israel’s forces at the waters of Merom. Nelson’s NIBD says, “Hazor was one of the most important fortresses in the land (Josh. 11:10). This was due to its enormous size, its large population, and its strategic location of the main road between Egypt and Mesopotamia” (p.546).

It is recorded in the next verse, Josh. 11:11, that Joshua burned Hazor down, but not the surrounding cities. Verse 13 continues: “But as for the cities that stood on their mounds, Israel burned none of them, except Hazor only, which Joshua burned.” The standard procedure during the conquest was not to burn down the cities—God was giving them to Israel as their inheritance in which to live. Therefore it should not surprise us when the “critic” says there is not a lot of evidence of destruction, etc., to date Joshua’s conquest of Israel. There is a big difference between destruction and conquest. I.e., cities such as Jericho, Ai, and Hazor were the exceptions and not the rule. 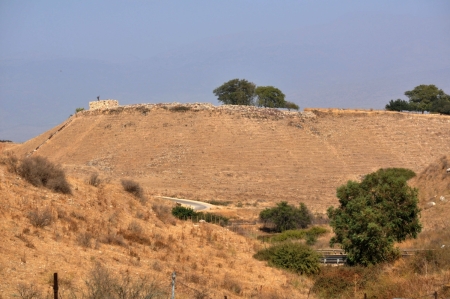 Biblical Hazor. “Formerly the head of all those kingdoms” (Josh. 11:10). Note the watchtower at upper left. Photo by Leon Mauldin.

Between the time of the Conquest and the time of the Judges, Hazor had rallied and was again a very serious threat, as God allowed the armies of Hazor to oppress the Israelites because of Israel’s sinfulness (Judges 4:1-3). These were the days in which God raised up Deborah to be judge and prophetess; Israel’s army was led by Barak (Judges 4-5).

Solomon made Hazor one of his fortified cities, which functioned as a military outpost (1 Kings 9:15). It continued to be an important city until its destruction by Tiglath-Pileser in 732 B.C. (2 Kings 15:29). The Solomonic gates, like those at Megiddo and Gezer, were an important feature of the city.

The city of Hazor occupied some 200 acres, making it the largest city in ancient Israel. Hazor is now the largest archaeological site in Israel. Remains show not only evidence of Israel’s occupation, but also prior Canaanite structures as well.

Extra-biblical references to Hazor: Hazor is previously mentioned in the Egyptian Execration texts from the 19th or 18th century B.C. It is listed in the Mari documents of the 18th century B.C. as one of the major commercial centers in the Fertile Crescent. Hazor is also mentioned in the Egyptian documents of the New Kingdom, such as the city lists of Tutmoses III, as well as Amenhotep II and Seti I.

Hazor, One of Solomon’s Fortress Cities

1 Kings 9:15 reads, “Now this is the account of the forced labor which King Solomon levied to build the house of the LORD, his own house, the Millo, the wall of Jerusalem, Hazor, Megiddo, and Gezer.

During the time of pre-conquest Canaanite occupation, “Hazor formerly was the head of all these kingdoms” (Josh. 11:10), a reference to the city states of northern Canaan. It was located on the strategic Via Maris. This is a view of the tel:

Tel Hazor, one of the cities Solomon fortified. Photo by Leon Mauldin.

I have previously written on Hazor here.

Hazor, Head of All These Kingdoms

As we have mentioned, our purpose on this current trip to Israel is to visits sites we have not seen before, many of which would not be practical to visit with a tour group. We were successful again today in doing so.

One place Ferrell Jenkins and I have seen previously many times is Hazor, but we included that city because recent visits have been either during or immediately following rain. Today it was dry and sunny. It was hot but it was nice not to have to walk in mud.

The signifance of this city which was conquered during Israel’s conquest of Canaan led by Joshua is seen in Josh. 11:10:

Then Joshua turned back at that time, and captured Hazor and struck its king with the sword; for Hazor formerly was the head of all these kingdoms.

Later during the days of the United Monarchy of Israel, King Solomon fortified this city.

Now this is the account of the forced labor which King Solomon levied to build the house of the LORD, his own house, the Millo, the wall of Jerusalem, Hazor, Megiddo, and Gezer (1 Kings 9:15). 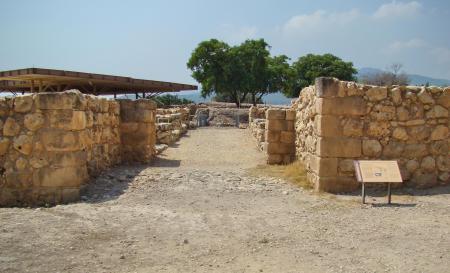 All of these cities of this text were fortress cities. Solomon used the same “blueprint” for the gates: the six chambered gate.

Unfortunately, in the process of time, Hazor became a center of cultic worship. Our photo shows the “high place” of Hazor.

Our photo below further shows an area where pagan worship occurred. 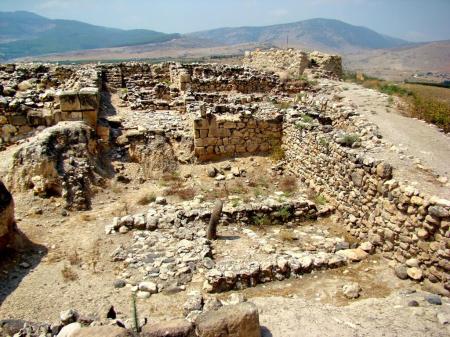 Site of pagan worship at Hazor. Photo by Leon Mauldin.

The forbidden massebah (sacred pillar) can be seen in foreground of photo. On the right hand corner of the tel you can see what was the base of the watchtower of Hazor.

Remember to click on photos for higher resolution.
*************
On a personal note I regret to report the death of a close personal friend, Sandra Waldron, wife of Bob Waldron. She died Sun. PM as the result of a massive heart attack, following some months of illness. The Waldrons have had a tremendous impact on my life, and I mourn this loss.