Ekron, a City of the Philistine Pentapolis

I love to study 1 Samuel, though there is much sadness in it. For example, in the days of the Judges when the Philistines defeated Israel at Aphek, God allowed the Philistines to take the Ark of the Covenant (1 Sam. 4:11). Contextually, God permitted this because of Israel’s apostasy.

Meanwhile the Philistines triumphantly took the Ark to the house of their god Dagon at Ashdod. The god was providentially broken, and the residents of Ashdod became sick, so they moved it to Gath, with the same results there; tumors broke out on them (1 Sam. 5:1-9). Next it was moved to Ekron: “So they sent the ark of God to Ekron. And as the ark of God came to Ekron the Ekronites cried out, saying, ‘They have brought the ark of the God of Israel around to us, to kill us and our people'” (v.10).

The next chapter (1 Sam. 6) narrates how the Philistines had kept the Ark to their full satisfaction (!), and thus returned it to Israel’s territory.

I had the opportunity (along with Ferrell Jenkins) to make a personal study trip to Israel in 2009 that included Ekron, Tel Miqne.

Ekron is a large tel, composed of about 50 acres. It was known for its olive oil industry. 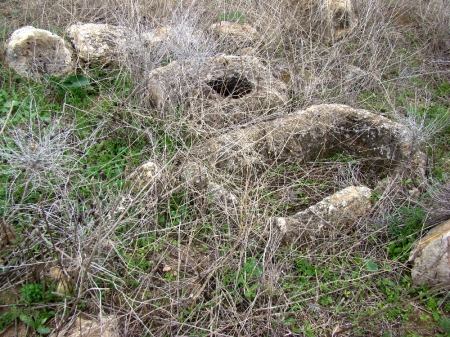 Holman Illustrated Bible Dictionary has this information on Ekron:

Northernmost of the five major Philistine cities known as the Pentapolis. The site of ancient Ekron has been much debated but now is generally agreed to be modern Tell Miqne, about 14 miles inland from the Mediterranean Sea and 10 miles from Ashdod. The site is one of the largest in Palestine, covering some 50 acres. Ekron lies on the road leading from Ashdod into the Judean hill country and up to Jerusalem through the Sorek Valley.

Ekron was assigned to both Judah (Josh. 15:11, 45–46) and Dan (Josh. 19:43) in the tribal allotments. It probably lay on the border between the tribes. Judges 1:18 reports that Judah captured Ekron along with other parts of the Philistine coast, but Ekron was certainly in Philistine hands at the time the ark was captured (1 Sam. 5:10). It was also the place to which the Philistines retreated after David slew Goliath (1 Sam. 17:52). Ahaziah, the son of King Ahab of Israel, called on the god of Ekron, Baal-zebub, when he was sick (2 Kings 1:2–16).

Excavations at Tell Miqne have discovered much pottery that is typically Philistine. From the last period before Tell Miqne was destroyed by the Babylonians, the excavators found an important industrial complex near the city gate. A hoard of iron agricultural tools was found. Hundreds of whole pottery vessels were present. Perhaps most importantly, a well-preserved olive press was discovered. This press is the largest and best preserved known in Israel. A horned altar was also found during the excavations. (pp. 469–470).

This entry was posted on Tuesday, December 30th, 2014 at 10:58 AM and is filed under Bible History and Geography, Bible Study, Israel, Old Testament, photography, Travel. You can follow any responses to this entry through the RSS 2.0 feed. You can leave a response, or trackback from your own site.