Recently we posted here on Nicaea. A remarkable portion of the Roman walls and gates can still be seen.

Some useful info on the decor of the gates at Nicaea and elsewhere can be found here:

Nicaea’s walls are well decorated with reliefs, with large heads, and also with column-shafts, both as horizontal wall-ties and as decoration: in the central one of the three square towers of the north wall, some 37 columns are used to decorate the upper stories and, at the same time, to act as floor-joists. The East Gate has reliefs, still visible, which impressed Kinnear, as did the reliefs and heads on the North (Constantinople) Gate. The south gate, for Bursa, has marble blocks and an inscription. The walls and towers on the north side are noticeably of creamy-white marble (in contrast with the much darker blocks used elsewhere: it is far from fanciful to perceive the desire to create an effect on the side of the city facing Constantinople, since we find exactly the same attention given to marble display in the more important parts of other citadels, such as Seljuk. Thus the antique monuments of Nicaea have been reused in the construction of the first set of mediaeval walls, in a direct echo of the marble prestige of the finest of Constantinople’s set pieces, the Porta Aurea itself. 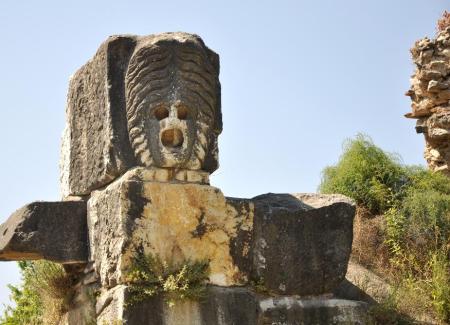