Physical Features of the Land of Israel

Fundamental to an understanding of the land of Israel is the feature of four longitudinal zones that define the land. 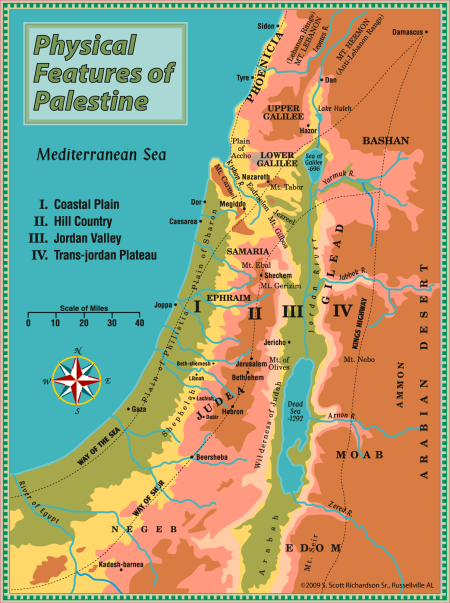 The land is naturally divided into four narrow zones running north and south.

1. Coastal Plain, from Philistia to Phoenicia. The coastal plain was the highway of commerce and conquest for centuries.

2. Central Hill Country. Rugged terrain, running from Judea though Samaria and into upper Galilee. The only major break in the mountain range is the Plain of Esdraelon also called the Valley of Jezreel. To the SW is the Shephelah,  a belt of gently rolling hills between 500 and 1,000 feet in height. Many of the OT events transpired here.

3. Jordan Valley. Follows the fault  that extends from Lebanon south to the earth’s surface, south to the dry Arabah Valley, the Gulf of Aqabah, and, eventually, the string of lakes on the African continent.

4. Transjordan Plateau. The zone east of the Jordan, where Reuben, Gad and the half-tribe of Manasseh settled.  The setting of Decapolis and Perea in NT times.

These factors helped determine where people lived, what crops could be grown where, and what land was good for cattle, etc. No place on earth has as much variety as the Bible land.

This entry was posted on Thursday, September 19th, 2013 at 10:32 PM and is filed under Bible History and Geography, Bible Study, Israel, Travel. You can follow any responses to this entry through the RSS 2.0 feed. You can leave a response, or trackback from your own site.

3 Responses to Physical Features of the Land of Israel