Some Sources for Dealing with Ron Wyatt’s Claims

I recently received a question from a friend, which says in part:

It concerns the crossing of the Read Sea. There is an awful lot of talk about the “traditional” Red Sea crossing maps versus the so-called “archaeological findings” purportedly found at the Gulf of Aqaba.

. . . However, some of our brethren have begun using maps and pictures that show what is believed to be possibly the “real Mt. Sinai” with charred rock covering its cap, a “split rock” in the wilderness, chariot wheels, etc… (I’m not buying it.) All of these things I see look like the work of Ron Wyatt, but all sorts of people have these things on their internet sites.

. . . All of that said, I was wondering if you had any material or resources dealing with the subject head on. I do not plan on making this an issue… nor do I plan on bringing anyone else’s name into the mix. I would just like to be able to give a “ready defense” if I am ever called upon. I’d greatly value your input on the matter. Thank you.

Others more qualified that I have dealt with the claims of Mr. Wyatt. As a starting point I can recommend the following sources: Ferrell Jenkins has an article entitled, “Pharaoh’s Chariot Wheels and Other Things that Won’t Float — Examining the Claims of the Late Ron Wyatt ,” that you can access here, plus another article entitled, “Pseudo Archaeologists” here. These articles have numerous related links for further reading. Additionally I would recommend Gordan Franz’s site, Life and Land, here. Use the search box. He has several entries under “Cracked Pot Archaeology.” The use of caution in using Mr. Wyatt’s material/claims would be prudent.
While no one can be certain of the exact location of Israel’s crossing. the best evidence would be somewhere along the Suez. 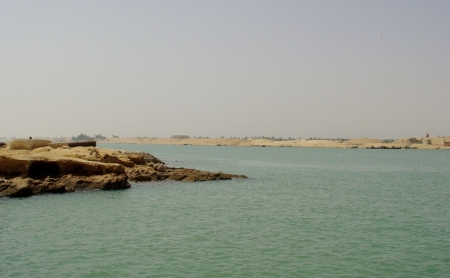 From Sinai looking across Suez to Egypt. Photo by Leon Mauldin.

I took the above photo in 2003, having crossed the Suez. We are standing on the Sinai side looking back across Egypt.