Yodfat, site of Josephus’ surrender to Vespasian’s Roman forces, was unoccupied after its destruction in AD 67. This Jewish Galilean city was considered to be very significant archaeologically, as it gives a glimpse of Jewish life just ca. 37 years after the death of Jesus. Beginning in 1993 Yodfat was excavated by a team of archaeologists led by the University of Rochester and the IAA. W.S. Green, educational director of the archaeological team, described Yodfat as a “pristine site.”

Yodfat info sign, in Hebrew. The University of Rochester led in the excavation. Photo by Leon Mauldin.

On the site is a memorial to the defenders of Yodfat. 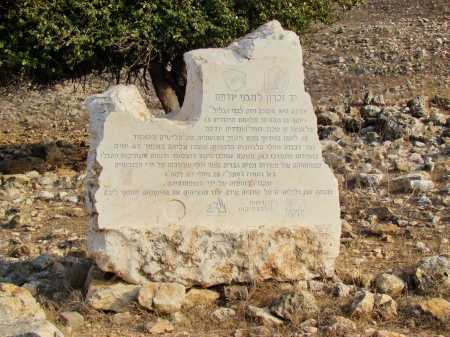 Onsite Memorial to Defenders of Yodfat. Photo by Leon Mauldin.

There were numerous caves at Yodfat. Inhabitants hid in locations such as these when the Romans advanced.

The picture emerging at Yodfat is of a devout community that clung to Jewish observance despite its poverty and distance from the center of Jewish worship, the Temple in Jerusalem, says University of Rochester religion professor William Scott Green, educational director of the archaeological team (Bible and Spade Volume 10. 1997, p.66).

This is interesting in view of the fact that many of the Jewish Galilean cities were an admixture of Judaism and paganism.

Excavations have unearthed numerous stoneware pots and mikvaot, or ritual baths. Both items indicate that the Galilee Jews of Yodfat observed stringent laws regarding ritual purity, a dominant concern of Temple Judaism. Stoneware, unlike the more porous earthen pottery, was used by devout Jews for eating because they believed it did not transmit ritual impurity, notes Green. Ritual baths, while expensive and difficult to build, were constructed inside a number of Yodfat homes, even though the town was not particularly wealthy and other architectural embellishments were lacking.

The use of Jewish coins bereft of Roman idols, evident in the types of money unearthed at Yodfat, was another symbol of ordinary piety (ibid.67).

This entry was posted on Friday, May 24th, 2013 at 10:47 AM and is filed under Archaeology, Bible History and Geography, Bible Study, Israel, New Testament, photography, Travel. You can follow any responses to this entry through the RSS 2.0 feed. You can leave a response, or trackback from your own site.

One Response to Yodfat, cont’d