One of Jesus “I Am” statements in the gospel of John is found in John 10:7: “Then Jesus said to them again, ‘Most assuredly, I say to you, I am the door of the sheep'” and again in v.9: “I am the door. If anyone enters by Me, he will be saved, and will go in and out and find pasture.” Because of verses such as these I am intrigued to see sheepfolds in biblical lands.

Sheepfold near Yodfat in Israel. Photo by Leon Mauldin.

Of course a door provides access. Inside is safety. Jesus is our access to the Father (John 14:6). In Him are all spiritual blessings (Eph. 1:3). The reference to going “in and out” is suggestive of going out for pasturage, and at the end of the day going in for rest. All of our spiritual needs are met in Christ.

‘Most assuredly, I say to you, he who does not enter the sheepfold by the door, but climbs up some other way, the same is a thief and a robber. 2 But he who enters by the door is the shepherd of the sheep. 3 To him the doorkeeper opens, and the sheep hear his voice; and he calls his own sheep by name and leads them out. 4 And when he brings out his own sheep, he goes before them; and the sheep follow him, for they know his voice. 5 Yet they will by no means follow a stranger, but will flee from him, for they do not know the voice of strangers.’ 6 Jesus used this illustration, but they did not understand the things which He spoke to them. 7 Then Jesus said to them again, ‘Most assuredly, I say to you, I am the door of the sheep. 8 All who ever came before Me are thieves and robbers, but the sheep did not hear them. 9 I am the door. If anyone enters by Me, he will be saved, and will go in and out and find pasture. 10 The thief does not come except to steal, and to kill, and to destroy. I have come that they may have life, and that they may have it more abundantly’ (NKJV). 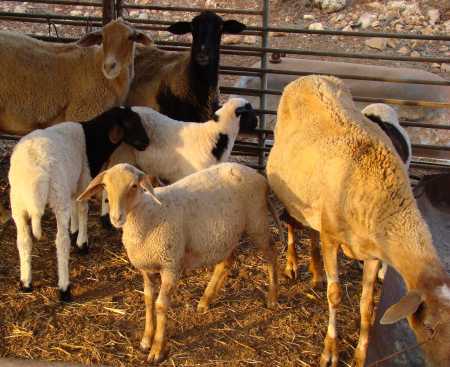 Sheep within the sheepfold. Photo by Leon Mauldin.

These sheep within the sheepfold were photographed near Yodfat in Galilee. From this site one can see Cana in the distance.

Wikipedia has this info regarding 1st century Yodfat, a city referenced by the Jewish historian Josephus:

By the first century CE Yodfat had expanded to encompass an area of 50 dunams (13 acres). Its siege and subsequent destruction in 67 CE are described in Josephus Flavius’ The Wars of the Jews, his chronicle of the Great Jewish Revolt against the Romans. Led by future emperor Vespasian, three Roman legions — Legio V Macedonica, X Fretensis, and XV Apollinaris — besieged Yodfat, meeting strong Jewish resistance. After 47 days the city fell by treachery, and Josephus describes the death of 40,000 Jews and the enslavement of 1,200 women and children. Yodfat was razed and burnt on the first of the Hebrew month of Tammuz. While a few dozen remaining fighters committed suicide, Josephus managed to survive this pact and was captured by the Romans.