Archaeologists have determined there were three building phases at Omrit: first, the temple built by Herod the Great, second, the temple built probably by Trajan (AD 98-117), and third, an industrial complex to the north constructed in the Byzantine period.

Here you can see the steps leading up to the temple. This site has been identified as a location for Imperial Cult Worship.

Steps to Imperial Temple at Omrit. Photo by Leon Mauldin.

This photo shows the southwest corner of the temple. The large stones horizontally placed at center have been identified as Herodian. Herod was a politician and he overtly courted the favor of the Emperor Augustus. 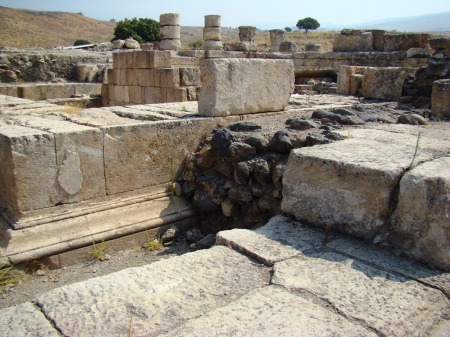 This entry was posted on Thursday, September 13th, 2012 at 10:44 AM and is filed under Archaeology, Bible History and Geography, Bible Study, Israel, New Testament, photography, Roman Empire, Travel. You can follow any responses to this entry through the RSS 2.0 feed. You can leave a response, or trackback from your own site.

One Response to More Re: Omrit