The Disciples Were Called Christians First at Antioch

Luke narrates the preaching of the good news of salvation in the city of Antioch:

But some of them [disciples who scattered by the persecution in Jerusalem] were men from Cyprus and Cyrene, who, when they had come to Antioch, spoke to the Hellenists, preaching the Lord Jesus. 21 And the hand of the Lord was with them, and a great number believed and turned to the Lord. 22 Then news of these things came to the ears of the church in Jerusalem, and they sent out Barnabas to go as far as Antioch. 23 When he came and had seen the grace of God, he was glad, and encouraged them all that with purpose of heart they should continue with the Lord. 24 For he was a good man, full of the Holy Spirit and of faith. And a great many people were added to the Lord. 25 Then Barnabas departed for Tarsus to seek Saul. 26 And when he had found him, he brought him to Antioch. So it was that for a whole year they assembled with the church and taught a great many people. And the disciples were first called Christians in Antioch. (Acts 11:20-27).

This is a very instructive passage, helpful in defining who is a Christian. A Christian is:

Antioch (modern Antakya) was located in Syria in biblical days, but today is within the territory of Turkey.  Antioch is twelve miles east of the Mediterranean, on the southern bank of the Orontes river and near the slopes of Mt. Silpius. 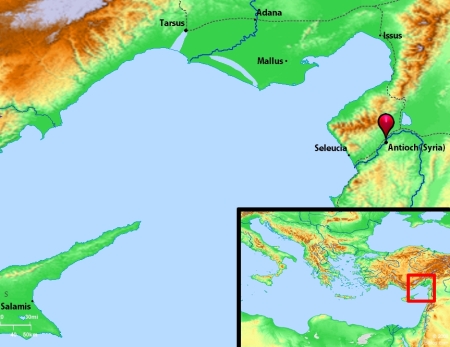 Antioch turned out to be the beginning point for Paul’s preaching journeys (Acts 13:1ff).

Eerdman’s Bible Dictionary has this info re: Antioch:

Built by Seleucus I Nicator (300 B.C.) as the capital of the Seleucid kingdom, it became the third most important city of the Roman Empire (after Rome and Alexandria). The layout of the city was a marvel. It was traversed from west to east by a colonnade of four rows of marble pillars between which lay three roads, a central road for the traffic of heavy vehicles and two outer ones for pedestrians, horses, and luxury carriages. A second colonnade began in the north at an island in the Orontes river and ran southward, and the city was thus divided into four districts by a gigantic, glittering, white-marble cross. North of the winding Orontes was the royal Seleucid palace, and on the northeast side of the city was the wall of Tiberius. The enchanting nature paradise of Daphne, where worshippers frequented the temple of Apollo, was to the south; its springs supplied ample water to the city. Archaeological excavations have uncovered mosaic floors of villas, an altar to unknown deities, a temple of Demeter, and numerous sculptures and images of deities (pp.60–61).

This entry was posted on Monday, August 6th, 2012 at 10:14 PM and is filed under Bible History and Geography, Bible Study, New Testament, photography, Travel, Turkey, Uncategorized. You can follow any responses to this entry through the RSS 2.0 feed. You can leave a response, or trackback from your own site.

3 Responses to The Disciples Were Called Christians First at Antioch