“We Remember the Fish” (in good ole Egypt)

Memory is an amazing thing. I view it as a gift from God. One of the saddest events imaginable is for one to lose his memory, his ability to remember and recall life’s experiences, what one has learned, etc.

The ability to learn God’s word and apply it to life’s circumstances is a blessing. For that reason I encourage especially young people to spend much time in memorization of God’s word.

If one does not incline his heart Godward, memory can be amazingly quirky. When the nation of Israel was yet in Egypt, all they could think about was their harsh treatment meted out by cruel taskmasters. In their affliction they cried out to God.

God brought them out of Egypt after a mighty display of His power with the 10 plagues, referenced by God Himself as judgments against the gods of Egypt (Exodus 6:6; 12:12). They crossed the Red Sea, and made their way to Sinai, where they encamped for 11 months. During this time they received the Ten Commandments (along with its other laws), built the tabernacle, and consecrated the Aaronic priesthood (Ex. 19-Num. 10).

God was mindful of His covenant with Abraham; at that point it was time to grant Israel possession of the promised land of Canaan. At His command and direction Israel began to march (Num. 10:11ff). But immediately they lost sight of God’s lofty purpose with them and began to murmur (Num. 11:1).

One such instance of murmuring is related:

Now the mixed multitude who were among them yielded to intense craving; so the children of Israel also wept again and said: “Who will give us meat to eat? 5 “We remember the fish which we ate freely in Egypt, the cucumbers, the melons, the leeks, the onions, and the garlic; 6 “but now our whole being is dried up; there is nothing at all except this manna before our eyes!”

Talk about selective memory! Talk about rewriting history! The New Testament identified the problem as a lack of faith (Heb. 3-4). Stephen showed that the heart of the problem was a problem of the heart: “in their hearts they turned back to Egypt” (Acts 7:39). 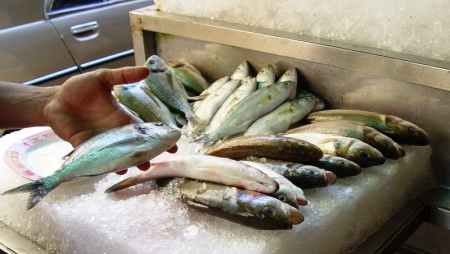 I photographed these fresh fish at a local restaurant in Alexandria. My daughter and I dined there.

Israel remembered the fish, but forgot God’s purpose for them. Photo by Leon Mauldin.

This entry was posted on Sunday, August 5th, 2012 at 8:59 AM and is filed under Bible History and Geography, Bible Study, Egypt, Israel, Old Testament, Travel, Uncategorized. You can follow any responses to this entry through the RSS 2.0 feed. You can leave a response, or trackback from your own site.