The Routledge Sourcebooks for the Ancient World includes Trials From Classical Athens. The 2nd edition is to be available as of Dec. 11, according to Amazon.

The setting for the trials in classical Athens is the Areopagus. The cases in this book came before the Athenian courts in the period of classical Athenian democracy, late fifth and fourth century BC.

Bible students know that the Areopagus is also mentioned in Acts 17 in connection with Paul’s opportunity to preach to  the Athenians, including the Epicurean and Stoic philosophers (Acts 17:22f.). 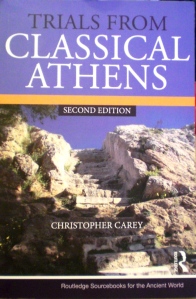 From the back cover:

The ancient Athenian legal system is both excitingly familiar and disturbingly alien to the modern reader. It functions within a democracy which shares many of our core values but operates in a disconcertingly different way. Trials from Classical Athens assembles a number of surviving speeches written for trials in Athenian courts, dealing with themes which range from murder and assault, through slander and sexual misconduct to property and trade disputes and minor actions for damage. The texts illuminate key aspects both of Athenian social and political life and the functioning of the Athenian legal system.

This new and revised volume adds to the existing selection of key forensic speeches with three new translations accompanied by lucid explanatory notes. The introduction is augmented with a section on Athenian democracy to make the book more accessible to those unfamiliar with the Athenian political system. To aid accessibility further a new glossary is included as well as illustrations for the first time.

I granted permission to the publishers usage of my photo for the front cover. It depicts the steps up the Areopagus from the back side.

Leon’s Message Board has a post on the Areopagus here, which includes the above photo.

Ferrel Jenkins has a current post which shows the Areopagus from this same side but further back. See here.