Last month we had the occasion to visit Adullam. Ferrell Jenkins posted on this here. Earlier I did a post dealing especially with the narrative of 2 Samuel 23:13-17, where David and some of his men were at the cave of Adullam, when he longed for water from the well by the gate at Bethlehem. See here for post, “David’s Mighty Men.”

While seeing the biblical site of Adullam it became apparent why David would have longed for the water from Bethlehem. Adullam is on a hill. 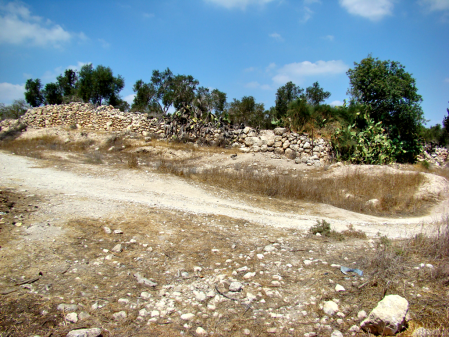 There was water at Adullam. Like so many sites in Israel, water was collected in cisterns.

Our driver and guide Daphna drew some water from the cistern and then poured it back. We did not take a drink so I cannot vouch for its taste.

Daphna draws water and pours it back into the cistern at Adullam. Photo by Leon Mauldin.

David’s three men traveled 13 miles to the east to get to Bethlehem from Adullam.

Bethlehem would be to our far right, 13 miles distant from Adullam. Photo by Leon Mauldin.

David knew the difference between water that was living and fresh, like that at Bethlehem, and water collected in a cistern.

This distinction is helpful in understanding the Lord’s admonition to Judah through Jeremiah the prophet:

For My people have committed two evils: They have forsaken Me, The fountain of living waters, To hew for themselves cisterns, Broken cisterns That can hold no water (Jeremiah 2:13).

This entry was posted on Thursday, October 20th, 2011 at 10:38 PM and is filed under Bible History and Geography, Bible Study, Israel, Old Testament, Travel. You can follow any responses to this entry through the RSS 2.0 feed. You can leave a response, or trackback from your own site.