Egypt: Plague upon the Cattle

Then the LORD said to Moses, “Go to Pharaoh and tell him, ‘Thus says the LORD, the God of the Hebrews, “Release my people that they may serve me! 2 For if you refuse to release them and continue holding them, 3 then the hand of the LORD will surely bring a very terrible plague on your livestock in the field, on the horses, the donkeys, the camels, the herds, and the flocks. 4 But the Lord will distinguish between the livestock of Israel and the livestock of Egypt, and nothing will die of all that the Israelites have.”‘” 5 The LORD set an appointed time, saying, “Tomorrow the LORD will do this in the land.” 6 And the LORD did this on the next day; all the livestock of the Egyptians died, but of the Israelites’ livestock not one died. 7 Pharaoh sent representatives to investigate, and indeed, not even one of the livestock of Israel had died. But Pharaoh’s heart remained hard, and he did not release the people (NET).

In our previous post we showed how the plagues were said to be judgments against the gods of Egypt. Regarding the plague upon the cattle, Dr. David Livingston said:

This judgment was against the bull god (revered as early as the Archaic Period (35), and the sacred cattle of Hathor, the cow-headed love goddess. It was a special reproach to pharaoh who worshipped Hathor. Hathor, whose name means “house of Horus,” was sacred as early as the Old Kingdom (41, 58). Other gods associated with cattle were Ptah and Amon.
Great cemeteries of embalmed cattle have been excavated. The symbol of the bull was the symbol of pharaoh himself (Bible and Spade, Vol. 4, Num. 1, p. 10).

The museum at Alexandria, Egypt, has a display of a sacred bull. 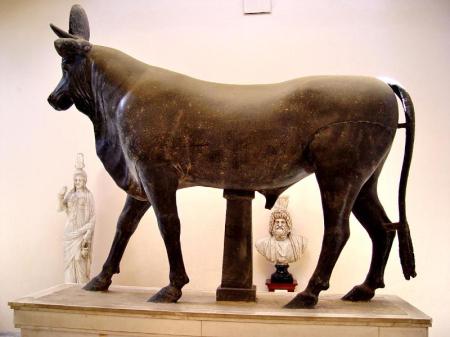 The cow-goddess Hathor was widely worship in Egypt. This image is from Hatshepsut’s three-tiered funerary palace at Deir el-Bahari. 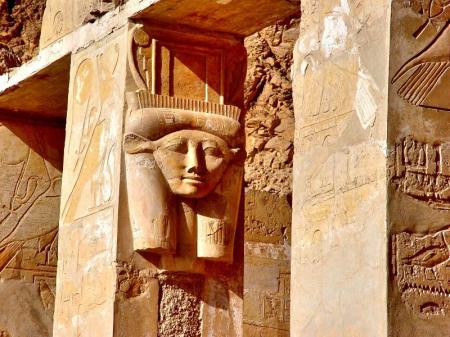 The best evidence is that these events transpired during Egypt’s Eighteen’s Dynasty, when the nation was at the peak of its power.

This entry was posted on Tuesday, April 26th, 2011 at 11:14 PM and is filed under Bible History and Geography, Bible Study, Egypt, Old Testament. You can follow any responses to this entry through the RSS 2.0 feed. You can leave a response, or trackback from your own site.