Last evening we arrived in Jerusalem, but I did not post last night as I was having internet problems.

Before leaving Galilee yesterday morning we visited Capernaum. Capernaum means “town of Nahum” (New Unger’s Bible Dictionary, p.209), and is called “the most important city on the northern shore of the Sea of Galilee (Nelson’s New Illustrated Bible Dictionary, p. 245). Though Jesus’ home town was Nazareth, Capernaum was where He lived during the Galilean ministry. Note the wording of the NET in Matt. 4:13, “While in Galilee, he moved from Nazareth to make his home in Capernaum by the sea, in the region of Zebulun and Naphtali.” To that compare Mark 2:1: “Now after some days, when he returned to Capernaum, the news spread that he was at home,” with its parallel in Matt. 9:1, which says Jesus came “to His own city.”

The impressive remains of a beautiful white limestone synagogue can be seen at Capernaum. While these ruins are post 1st century, excavations below these remains show evidence of an earlier synagogue, built of black basalt stones, which hasbeen determined to be of AD 1st century usage.

Capernaum was among three cities Jesus publicly rebuked for their unbelief manifested in their refusal to repent at the preaching of Jesus. The inhabitants of Capernaum had received much, but believed litt.e There is a biblical principle here: “For everyone to whom much is given, from him much will be required; and to whom much has been committed, of him they will ask the more” (Lk. 12:48).

While at Capernaum I took a group shot as our guide Elie was giving info re: the site. 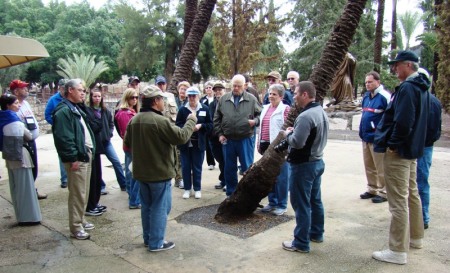 Thanks for following our travels. It is a joy to do biblical studies on location.

This entry was posted on Sunday, March 13th, 2011 at 3:03 PM and is filed under Bible History and Geography, Bible Study. You can follow any responses to this entry through the RSS 2.0 feed. You can leave a response, or trackback from your own site.

One Response to Capernaum, Jesus’ Home During Galilean Ministry