Acts 18:11 informs us that Paul remained in Corinth for a year and six months; in v. 18 we are informed that “Paul still remained a good while.” This was during Paul’s 2nd Missionary Journey. Paul was a tent maker, as were his fellow-workers, Aquila and Priscilla, that great husband-wife team (Acts 18:3). Our photo below features the ruins of some of the many shops that were in ancient Corinth.  It is not difficult to imagine these biblical characters working in one of these locations. 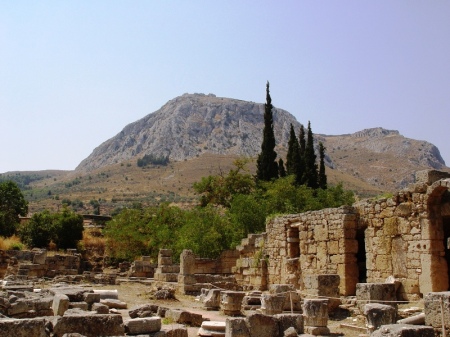 Shops at Corinth. Acrocorinth in background. Photo by Leon Mauldin.

The Acrocorinth is in the background. We have referenced this in some of the previous posts.

Of course during Paul’s stay at Corinth here his purpose was that of preaching the Gospel (Acts 18:11).  But he worked at his trade to help with the necessary financial support. Incidentally, these structures shown in our photo were the west shops of the city.

When Paul left Corinth, Aquila and Priscilla traveled with him, accompanying him as far as Ephesus, while Paul journeyed on to Jerusalem. We learn in Acts 18:18 that in their departure from Corinth they used the port of Cenchrea, shown in our photo below. 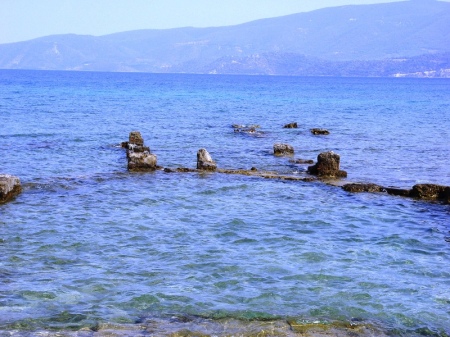 We learn from Romans 16:1 that there was a congregation of Christians there, as Paul makes special mention and recommendation of Phoebe, “a servant of the church in Cenchrea.” It was at this time during Paul’s 3rd Missionary Journey that he wrote the Christians at Rome from Corinth.  As Phoebe was traveling there to Rome, Paul asked, “that you may receive her in the Lord in a manner worthy of the saints, and assist her in whatever business she has need of you; for indeed she has been a helper of many and of myself also” (Romans 16:2).

The landscape in our Cenchrea photo would be what Christians such as Phoebe would have seen, as well as Paul and his companions.

This entry was posted on Thursday, January 6th, 2011 at 10:49 AM and is filed under Bible History and Geography, Bible Study, Corinth, Travel. You can follow any responses to this entry through the RSS 2.0 feed. You can leave a response, or trackback from your own site.