Today’s post features the Athens Temple of Hephaestus. Hephaestus was the mythical god of forging and metal working, the god of blacksmiths. Construction on the temple was begun in 449 BC, and was completed 415 BC. It is a Doric style temple, made of Pentelic marble, and is located on the northwest side of the agora. 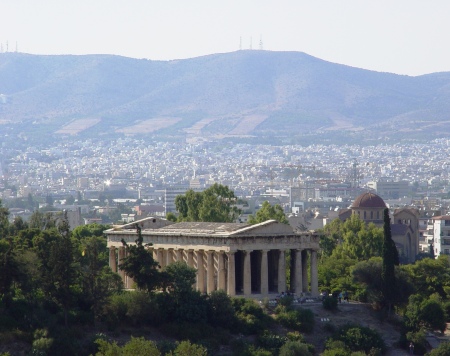 Athens Temple of Hephaestus. The god of forging. Photo by Leon Mauldin.

This temple is said to be the best preserved ancient Greek temple in the world. It would have been prominently overlooking the agora when Paul preached in Athens (Acts 17).

In Birmingham, AL., known in the past as a major steel producer, the Vulcan stands atop Red Mountain (largest cast iron statue in the world). Vulcan is the Roman equivalent to the Greek Hephaestus. The word vulcanize comes from his name.