It is not unusual for some to have the impression that today Israel is altogether a dry and rocky land, especially when one has perhaps seen photos of the rugged wilderness of Judea, or other such barren areas.

One of the distinct features of the land of Israel is the amazing variety of the land.  At the coast you are at sea level.  Thirty-five miles east of Joppa you are 2500 above sea level at Jerusalem.  Another fourteen miles NE and you are at Jericho, 800 feet below sea level. South from there you will be at the Dead Sea, the lowest point on the face of the earth, 1300 feet below sea level.  But go north to the Golan, and much of the year you will see snow at Mt. Hermon.

Today’s photos were taken in the southern plain going from the Joppa/Tel Aviv area going from west to east, so we are looking to the south in the photos.  These aerial shots were taken this past Dec.  and you will see greenery and evidence of agriculture. Bear in mind also that during the OT period this area would have been inhabited by the Philistines much of the time.

These aerial shots certainly give one a perspective different from ground level!

Again, this is typical terrain as you make your way toward the Shephelah and then on to the central hill country.

Here is one more.  You get the idea.  A lot of photosynthesis is taking place here! 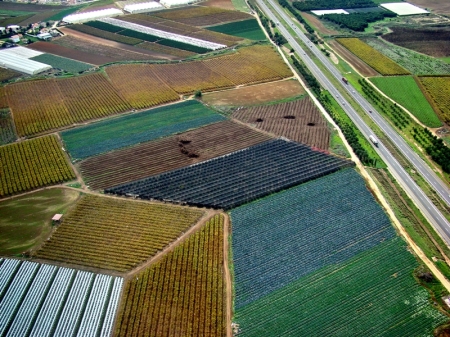