The Fullness of the Time

Galatians 4:4 states, “But when the fullness of the time had come, God sent forth His Son, born of a woman, born under the law…”

The appropriate time determined by God that Jesus would become flesh is called the fullness of the time. A careful reading of the Old Testament Scriptures necessitates the conclusion that all was anticipatory of the coming of Christ.  To read the Old Testament with understanding, is to witness the unfolding of God’s plan to bring Christ into the world.  The only hope of all humanity is the redemption that is in Jesus.

There are many passages that demonstrate this; some are more plain and direct than others. Texts such as Isa. 53 clearly speak of Christ and His suffering, death, and resurrection. But even in places such as Gen. 5, and Gen. 11, when you come to those long lists of names, they are there for a purpose.  No effort is made to list everybody, but the generations are traced from Adam through Seth down to Noah (Gen. 5).  Then we continue from Noah through Shem down to Terah the father of Abram (Abraham (Gen. 11).  We want to bear in mind when we read such passages that we are working toward the fullness of the time.

Our God is sovereign.  He rules in the kingdoms of men (Dan. 4:17). Following the purging of idolatry from His people through the Babylonian captivity, there was the emergence of the synagogue. During the Medo-Perisan period, it was only a remnant of the Jews who returned to the land of Israel.  The rest remained in the areas where they had been dispersed. 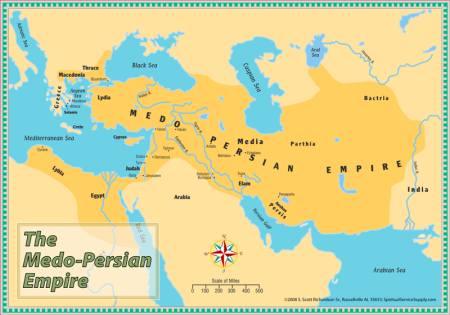 Where was the first place the Apostle Paul would preach as he entered a city?  The synagogue!  For centuries at such locations scattered throughout the world there had been the reading and teaching of the Law.  Paul’s job was to tell them the good news, that their Scriptures had been fulfilled in Jesus Christ!  But God had been preparing them (the Jews) for that point in time throughout their history.  The fullness of the time had come!

With the fall of Persia and the rise of Greece the hand of God continued to be seen.  With the advance of Grecian culture by Alexander the Great, the Greek language became universal.  Though the Hebrew language was becoming largely unspoken (a dead language), during the Grecian period the Scriptures were translated into Greek (this translation was called the Septuagint). So anyone who could read Greek could read the OT Scriptures!  Most all of the quotations by Jesus and the NT writers were from this Greek translation.  Then when it was time to preach the good news of salvation in the name of Jesus, beginning in Acts 2, there was a universal language by which the Gospel would be proclaimed–Greek.  When the NT Scriptures were written, they were written in Koine (common) Greek!  The fullness of the time had come!

Next in history there was the rise of the Roman Empire.  Rome put an end to piracy at sea, and built roads and bridges such as the world had never seen.  Never before was it possible to safely and efficiently travel such great distances by land and sea, as was the case by the 1st century, just in time for the Gospel to be preached “to every creature” (Mk. 16:16; Col. 1:23).

So you see, even working through the kingdoms of men (without their knowledge), God was making all things ready for the coming of His Son.  Our God is an awesome God.

A resource I would recommend for your further study is The Theme of the Bible, by Ferrell Jenkins. It is available at the Florida College Bookstore at

Maps in today’s post are by my friend Scott Richardson. You may view & order his biblical study supplies at http://SpiritualServiceSupply.com

This entry was posted on Friday, September 24th, 2010 at 9:43 AM and is filed under Bible History and Geography, Bible Study, Evidences, Theme of the Bible. You can follow any responses to this entry through the RSS 2.0 feed. You can leave a response, or trackback from your own site.