Camels in the Times of the Patriarchs, Pt. 2

Unbelievers tirelessly charge that the Bible is inaccurate in its references to the camel in the days of the patriarchs (see our previous post).  Accordingly, the twenty-three occurrences of the word camel in Genesis are dismissed as anachronisms. While this is not surprising on the part of skeptics/atheists, it is disturbing when otherwise good reference books, such as Reader’s Digest’s The Bible Through The Ages takes the same position. Likewise the Illustrated Dictionary & Concordance of the Bible, copyright 1986 by G.G. The Jerusalem Publishing House LTD.

Consider this response from The New Unger’s Bible Dictionary, edited by Merrill Unger:

This idea seems to be presumptuous in the light of such evidence as camel statuettes, bones, and other references that appear in archaeological materials beginning about 3,000 B.C. (cf. J.P.Free, “Abraham’s Camels,” Journal of Near Eastern Studies [July 1944]:: 187-93). Free’s research concerned the use of camels in Egypt. In recent years numerous indications of the domestication and use of camels in Mesopotamia and Syria during the patriarchal period have come to light.

Since wild camels were known from earliest times, there is no credible reason why such an indispensable animal in desert and semi-arid lands should not have been sporadically domesticated in patriarchal times and even earlier.  Large scale domestication after the twelfth century B.C., however, greatly expanded desert trade as a result of the advantages of camel nomadism over donkey nomadism, enabling camel traders to travel much greater distances on this animal specially adapted to desert conditions (p.67). 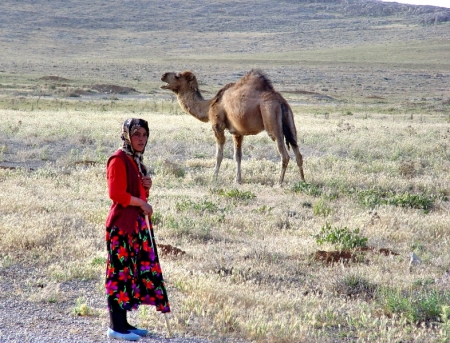 Further, consider this response to the skeptics by Staff and Lyons, of Apologetics Press:

What makes their claims even more disturbing is that several pieces of evidence do exist (and have existed for some time) that prove camels were domesticated during (and even before) the time of Abraham (roughly 2,000 B.C.). In an article that appeared in the Journal of Near Eastern Studies a half-century ago, professor Joseph Free listed several instances of Egyptian archaeological finds supporting the domestication of camels [NOTE: The dates given for the Egyptian dynasties are from Clayton, 2001, pp.14-68]. The earliest evidence comes from a pottery camel’s head and a terra cotta tablet with men riding on and leading camels. According to Free, these are both from predynastic Egypt (1944, pp. 189-190), which according to Clayton is roughly before 3150 B.C. Free also listed three clay camel heads and a limestone vessel in the form of camel lying down—all dated at the First Dynasty of Egypt (3050-2890 B.C.). He then mentioned several models of camels from the Fourth Dynasty (2613-2498 B.C.), and a petroglyph depicting a camel and a man dated at the Sixth Dynasty (2345-2184 B.C.). Such evidence has led one respected Egyptologist to conclude that “the extant evidence clearly indicates that the domestic camel was known [in Egypt—EL] by 3,000 B.C.”—long before Abraham’s time (Kitchen, 1980, 1:228).

Perhaps the most convincing find in support of the early domestication of camels in Egypt is a rope made of camel’s hair found in the Fayum (an oasis area southwest of modern-day Cairo). The two-strand twist of hair, measuring a little over three feet long, was found in the late 1920s, and was sent to the Natural History Museum where it was analyzed and compared to the hair of several different animals. After considerable testing, it was determined to be camel hair, dated (by analyzing the layer in which it was found) to the Third or Fourth Egyptian Dynasty (2686-2498 B.C.). In his article, Free also listed several other discoveries from around 2,000 B.C. and later, which showed camels as domestic animals (pp. 189-190). [Quote from Kitchen is from The Illustrated Bible Dictionary.]

So the archaeological evidence is there, for those willing to see it.  The Bible does not affirm that camels were widely used in the time of the Patriarchs; it affirms that Abraham (and others) had camels and used them.

But the greatest source of proof that the Genesis record is true is not archaeological data. The single greatest proof is that Jesus Christ, the Son of God, believed, endorsed and taught it. Jesus affirmed the inspiration of Scripture. He affirmed the historicity of the patriarchs, for example in such texts as Matt. 22:31-32, “But concerning the resurrection of the dead, have you not read what was spoken to you by God, saying, ‘I am the God of Abraham, the God of Isaac, and the God of Jacob’? God is not the God of the dead, but of the living.”  Jesus believed that Abraham, Isaac, and Jacob were real persons, and what was recorded about them is real and historical. In short, if we accept the evidence that Jesus is the Christ, Son of God, we must believe what He believed, and teach what He taught!

In the earlier photo, the young lady with the camel was tending to seven camels.  She appeared to be about 15 years old.  She was part of a nomadic group.  The camel in the above photo at the Mount of Olives overlooking Jerusalem was there for tourists to ride (for a fee).  I would recommend that you ride a camel in some place other than the Mt. of Olives 🙂

This entry was posted on Monday, September 20th, 2010 at 12:05 PM and is filed under Archaeology, Bible History and Geography, Bible Study, Evidences. You can follow any responses to this entry through the RSS 2.0 feed. You can leave a response, or trackback from your own site.

One Response to Camels in the Times of the Patriarchs, Pt. 2