At the highest point of the acropolis at Lindos, Rhodes, there are the remains of a temple devoted to the worship of the goddess Athena.  It is said that architectural remains belong to a temple built in the late 4th century B.C. 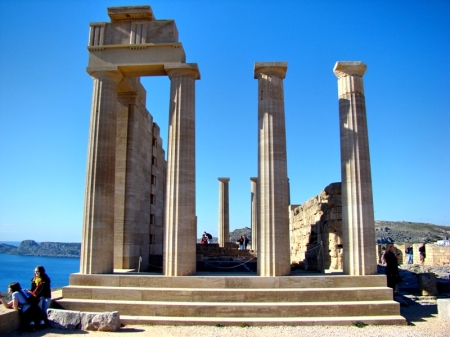 Often the worship of Athena is associated with the city of Athens, and its Parthenon, but the worship of this goddess was geographically widespread.  There was an important temple located at Pergamum, as well as Smyrna (two of the cities of the Seven Churches of Rev.2-3). There was a very visible temple devoted to Athena at the island of Assos (Acts 20:13).

One of the more striking impressions one receives in visiting the Bible lands is just how pervasive idolatry was.  Even today, evidences of such are seen everywhere.

When the Gospel was preached in the 1st century, there were many, such as the Thessalonians, who “turned to God from idols to serve the living and true God” (1 Thes. 1:9). There can be no fellowship with, no agreement of “the temple of God with idols” (2 Cor. 6:16).  Wherever such temples as depicted in our photo existed, the charge was,

Come out from among them and be separate, says the Lord.  Do not touch what is unclean, and I will receive you.  I will be a Father to you, and you shall be My sons and daughters, says the LORD Almighty (2 Cor. 6:17-18).

Natural beauty abounds at Rhodes.  Below is a photo of the harbor at Lindos.

This entry was posted on Wednesday, September 1st, 2010 at 3:25 PM and is filed under Bible History and Geography, Travel. You can follow any responses to this entry through the RSS 2.0 feed. You can leave a response, or trackback from your own site.

One Response to Lindos, Rhodes

Leave a Reply to Clay in the Potter’s Hand: Video « Leon's Message Board Cancel reply