Paul wrote the evangelist Titus in the New Testament letter that bears his name, instructing him to “speak the things that are proper for sound doctrine” (Titus 2:1).  That included teaching God’s will for men and women, young and old. Older women were to teach (train, encourage) the younger women “to be self-controlled, pure, working at home, kind, and submissive to their own husbands, that the word of God may not be reviled” (2:5, ESV).

I want to notice the word kind. Older Christian women are to teach the younger women to be kind.  The Greek word is agathos, often elsewhere rendered “good” (and here in KJV, NKJV), but here is translated “kind” by most (NASB, NIV, NET, NRSV, etc.).

Why would kindness be specified as an essential trait for younger women to acquire?  There may be many reasons, but perhaps at least one factor was simply the labor intensive lifestyle that characterized home responsibilities.

In the Golan, the restoration of Qatzrin gives us a glimpse of daily life in the time of Jesus and the centuries immediately to follow.

There are variant spellings for Qatzrin, such as Katzrin on this map; also Qasrin. The site is northeast of the Sea of Galilee.  This Talmudic Village was occupied during AD 4th-8th centuries.  Qatzrin was excavated by Z. Ma’oz and A. Killebrew.  The villiage has been reconstructed and furnished with artifacts from the period.

Our photo below shows a basalt olive-crushing mill. A different situation than simply going to the local supermarket and picking up a bottle of olive oil!

Grinding grain for bread had to be done regularly.  Some millstones had two handles, and were designed for two women (cf. Matt. 24:41).

Qatzrin features a fully-restored house with all its furnishings. 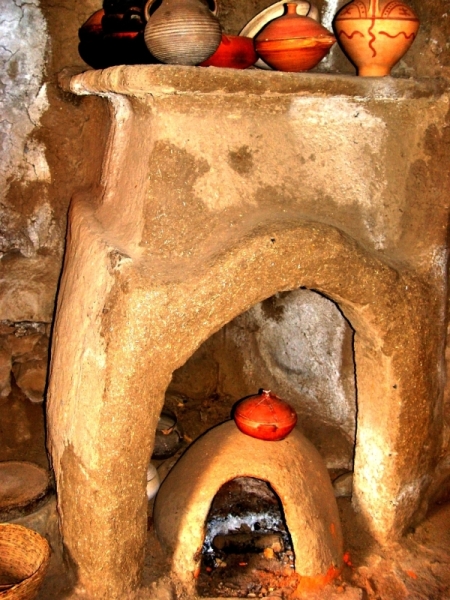 This isn’t exactly what we would call “fast food.”  The daily domestic duties would include a lot of hard work!  It would be quite conceivable that the cumulative effect would be to make a young mother/wife bitter and resentful.

What do you think?  I believe the nature of daily life with its responsibilities furnish at least one important reason for Paul’s injunction that older women teach the younger women to be kind. I’m thankful for the kind of work that has been done at Qatzrin which helps take us back to life during biblical times.

This entry was posted on Thursday, August 19th, 2010 at 10:53 AM and is filed under Bible History and Geography, Bible Study. You can follow any responses to this entry through the RSS 2.0 feed. You can leave a response, or trackback from your own site.

One Response to Home Life at Qatzrin, Golan