As Paul’s Third Missionary Journey neared its close, with Paul and his fellow travelers sailing the Mediterranean toward their destination of Jerusalem, Luke notes,  “Now it came to pass, that when we had departed from them [Ephesian Elders at Miletus] and set sail, running a straight course we came to Cos, the following day to Rhodes…” (Acts 21:1). Rhodes was an island off the southwestern shore of the Roman province of Asia Minor.  See map:

Island and City of Rhodes. Map courtesy of bibleatlas.org

You will notice both the island of Rhodes, and the city by that same name.  Regarding our Acts 21:1 passage quoted above, F.F. Bruce observes,

“Rhodes” here refers to the city rather than to the island of the same name (the chief island of the Dodecanese). The city of Rhodes, lying at the island’s north-eastern extremity, was founded in 408 B.C. by the amalgamation of three earlier settlements.  As the prevailing wind was from the north-east, they were able to accomplish this part of the voyage with a straight course (NICOT, Acts.420).

At Rhodes was one of the Seven Wonders of the Ancient World, the Colossus of Rhodes, a huge statue of the sun god Helios. It is traditionally depicted as straddling Mandraki harbor, but other believe it stood at the Temple of Apollo. See artist conception below:

For 56 years the brazen Colossus of Helios stood across the mouth of the barbor.  It was so large, being 105 feet high, that ships sailed between its legs.  It was considered one of the seven wonders of the ancient world.  The brazen Colossus represented the sun which shown almost every day on the island.  About 224 B.C., an earthquake threw the idol down. [Its fragments were still on the spot at the time of Paul’s visit.] In 600 A.C., its remains were sold to a Jew by the conquering Saracans.  It took 900 camels to carry the brass away (Acts.778).

Our photo below, taken in March of this year, shows the harbor looking out through the entrance to the sea. 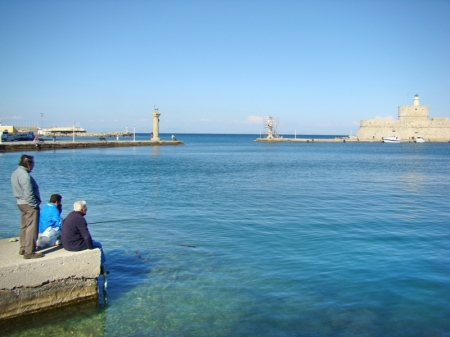 And here is a closer view: 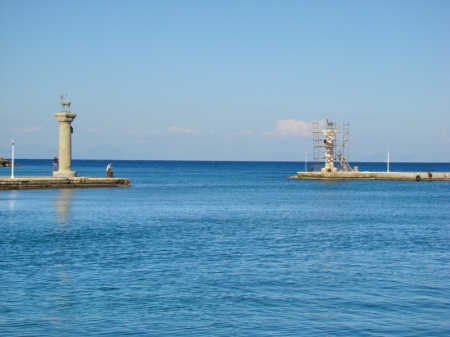 This entry was posted on Wednesday, July 28th, 2010 at 6:43 PM and is filed under Archaeology, Bible History and Geography, Uncategorized. You can follow any responses to this entry through the RSS 2.0 feed. You can leave a response, or trackback from your own site.