At Pergamum, the god Asclepius

We have been looking at the biblical city of Pergamum, the city where one of the seven churches of Asia (Rev. 2-3) was located.  Our last post featured photos from the Asklepieion, where the god of healing, Asclepius, was worshiped. There were other famous temples dedicated to this medicine god at Epidaurus in north-eastern Peloponnese, also on the island of Kos, as well as Trikala, and Gortys.

This photo is a statue of  Asclepius on display at the Athens Museum.  Notice the serpent intertwined on his staff.

The museum at Pergamum, modern Bergama, displays a serpent, symbol of Asclepius, along with votive offerings left by those who traveled there for healing. 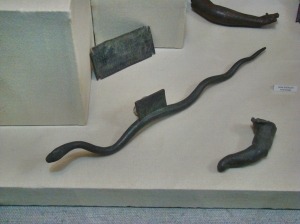 Here is a shot of body parts, left as votive offerings to the god Asclepius. 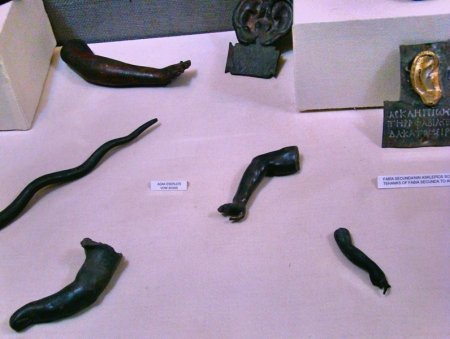 Temples devoted to Asclepius served a dual purpose, as not only a place of worship for the god, but also a luxury health spa of sorts, i.e., supposedly a healing center.

The patients would travel through the sacred passageway, seen in photo below.

You see the openings which let in light.  Also it is suggested that “physicians” may have spoken down to the patients as they moved through the passageway, speaking encouragement with their incantations, etc. 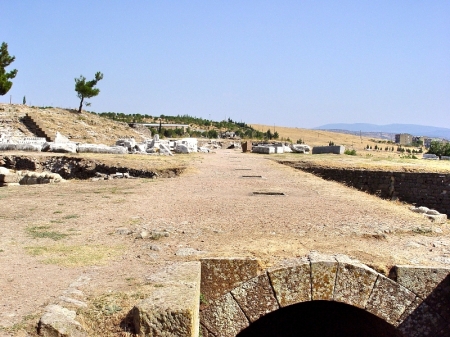 When Jesus wrote the church at Pergamum, He described the Christians there as dwelling “where Satan’s throne is” (Rev. 2:13).  Some see in that a specific reference to Asclepius, with his serpent symbol. Satan appeared in the Garden of Eden in the form of a serpent.  He is called “that serpent of old, the Devil and Satan, who deceived the whole world” (Rev. 12:8; cf. 2 Cor. 11:3).  Others suggest that Jesus is referring to the prominent worship of Zeus there at Pergamum. Still others would say that it is Pergamum’s position as a center for imperial worship that is under consideration.  Not to mention Bacchus, the wine god!  It is possible that Jesus had in mind specifically  one of these false systems, but it may well be that it is a combination of all of the above that gave rise to His description.

It is instructive to consider what Jesus does NOT tell the church to do.  He doesn’t tell them to pack their bags and move to some other location where it would be easier to live the Christian life.  He expected them to be faithful where they were, to be lights in that world of darkness, to do what was right, even when they lived next door to Satan!

This entry was posted on Tuesday, May 25th, 2010 at 12:33 PM and is filed under Archaeology, Bible History and Geography, Bible Study, Uncategorized. You can follow any responses to this entry through the RSS 2.0 feed. You can leave a response, or trackback from your own site.

3 Responses to At Pergamum, the god Asclepius