As we continue to look at biblical sites, especially in Turkey, we want to call attention to some points of interest in Pergamum, located at modern Bergama.  Fatih Cimok writes, “The word Pergamum is thought to have been from a pre-Hellenistic tongue and meant ‘citadel’ or ‘stronghold'” (Pergamum, 2009 ed., p.7).

Pergamum has an interesting history.  In ancient times, it wasn’t just the city of Pergamum, it was actually the kingdom of Permamum, which extended from Bythinia to Cappodoccia.

Pergamum came under Roman rule in 133 B.C., when King Attlos II died. He had bequeathed Pergamum to Rome in his will. It was during Roman times that a temple was built and dedicated to Emperor Trajan and his adopted son Hadrian. Todd Bolen observes, “The Trajan temple was the jewel of Pergamum.”

Today’s photos depict some of the ruins of the Trajan temple. Restoration has been done by the German Archaeological Institute.  Click on images for higher resolution. 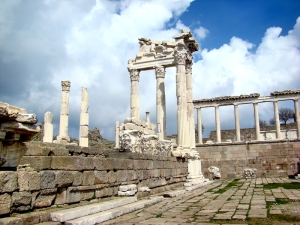 Pergamum became a center for the Imperial Cult, for emperor worship. Cimok writes:

Having an imperial temple would also bring many visitors to a city like Pergamum during the festivals held for the imperial cult, and consequently economic benefits; thus the cities on Roman soil (including Pergamum and Ephesus) competed over building imperial temples. (Ibid.17).

More to come on Pergamum. See also our previous posts on Emperor Worship at Ephesus April 10,11, and 14.