At Pergamum: Temple of Dionysus, the Wine god

In Greek mythology, Dionysus, a son of Zeus, was the wine god.  He was also known as Bacchus, his Roman designation.  As we continue to post photos of Pergamum, today we include the temple of Dionysus. The photo below shows the remains of the temple in the center, to the right of the theater. 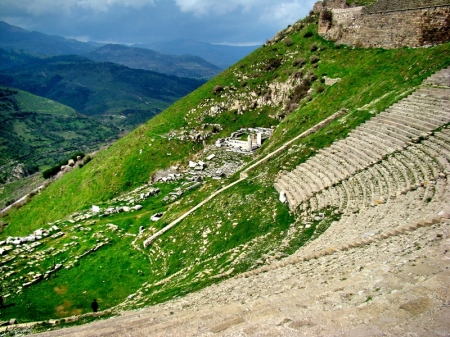 Temple of Dionysus at Pergamum. Photo by Leon Mauldin.

The placement of the temple in relation to the theater was not accidental. Dionysus was the patron deity of the theater (as well as agriculture). There was an intimate association of Dionysus with drama and public celebrations.  Here is a closer view: 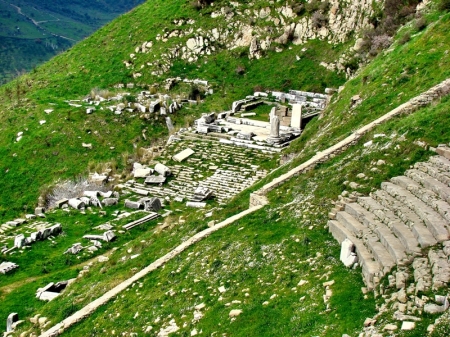 Worship of this deity predictably included wild drinking and drunkenness. Below is a view showing the approach to the temple.  Twenty five steps led up to the porch. 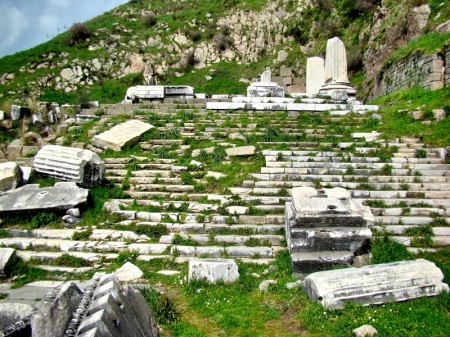 During the intertestamental period, Antiochus IV severely persecuted the Jews in his effort to Grecianize his subjects and destroy Judaism, with its distinctive features.  Among his atrocities was to force the Jews in Jerusalem to take part in festivities designed to honor the god Dionysus.  We read in 2 Maccabees 6:7:

On the monthly celebration of the king’s birthday, the Jews were taken, under bitter constraint, to partake of the sacrifices; and when a festival of Dionysus was celebrated, they were compelled to wear wreaths of ivy and to walk in the procession in honor of Dionysus.

This entry was posted on Sunday, May 16th, 2010 at 9:31 PM and is filed under Archaeology, Bible History and Geography, Bible Study. You can follow any responses to this entry through the RSS 2.0 feed. You can leave a response, or trackback from your own site.

One Response to At Pergamum: Temple of Dionysus, the Wine god