Our previous post featured a photo of one of Gezer’s boundary stones.  We noted, “Excavations (1964–73) have uncovered a six-chambered gate and defenses” (NBD).  Pharaoh king of Egypt took Gezer from the Canaanites and gave it as dowry for his daughter, who became Solomon’s wife (1 Kings 9:16).  Because of its strategic location in the Shephelah in the south, Solomon made it a fortress city.  The six-chambered gate referenced in the NBD article was characteristic of Solomon’s other fortress cities, such as Hazor and Megiddo (both also strategically located).

This aerial photo shows the tel of Gezer from the south looking north. 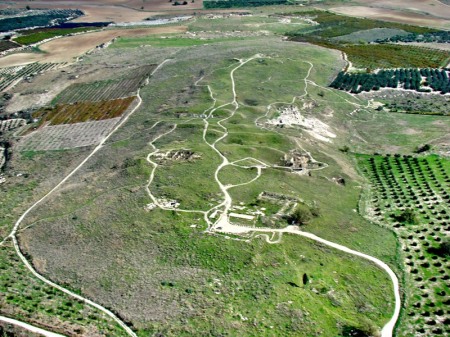 In the right center in photo below you can see the 6-chambered  gate.

This shows the gate at ground level. You can see the central hill country in the background.

Inside the gates there were benches where people could sit and visit, or carry on business transactions. In Dec. 2009 my friend and former professor Ferrell Jenkins and I visited the site.  This photo demonstrates the concept of “sitting at the gates” references in such passages as Gen. 19:1; 2 Sam. 19:8; Prov. 31:23, etc. Visit his blog at http://ferrelljenkins.wordpress.com/

Ferrell Jenkins at Gate at Gezer. Photo by Leon Mauldin.

This entry was posted on Sunday, March 28th, 2010 at 1:46 AM and is filed under Archaeology, Bible History and Geography, Bible Places, Bible Study. You can follow any responses to this entry through the RSS 2.0 feed. You can leave a response, or trackback from your own site.

One Response to Gezer’s Defense Gate