Among the many artifacts we photographed today was the Black Obelisk of Shalmaneser III (r. 858-824 BC). This Assyrian king forced Jehu, King of Israel (r. 841-814 BC) to pay tribute. This is one of those many exciting finds where the Bible and other historical records intersect! The Black Obelisk includes a pictograph/cuneiform record of this very important historical event. The  reads:

The inscription reads: I received the tribute of Jehu of the House of Omri silver, gold, a golden bowl, a golden goblet, golden cups, golden buckets, tin, a staff of the king’s hand, (and) javelins (7).”  All 14 of the Israelites pictured are bearded, with long hair and pointed caps. Each wears a belted tunic with fringe at the bottom.  In addition, each of the 13 porters wears a mantle or cloak over the tunic, which extends over the shoulders and is fringed or tasseled down the front on both sides.  Jehu is not wearing the outer garment, possibly as a sign of humiliation before Shalmaneser.  (NIV Arch. Bible).

This is detailed on one of the four sides, second panel down: 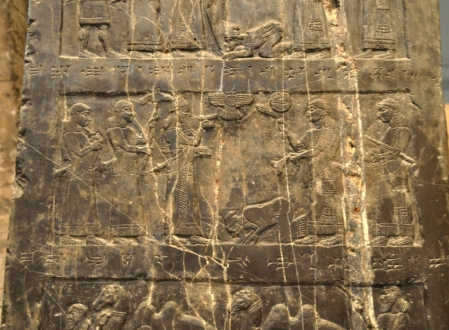 Shalmaneser’s Black Obelisk. This panel shows King Jehu paying tribute to the Assyrian King. The year was 841 BC. Photo by Leon Mauldin.

Here is a photo of the 4-sided stone in its entirety, with our facing the side that mentions Jehu: 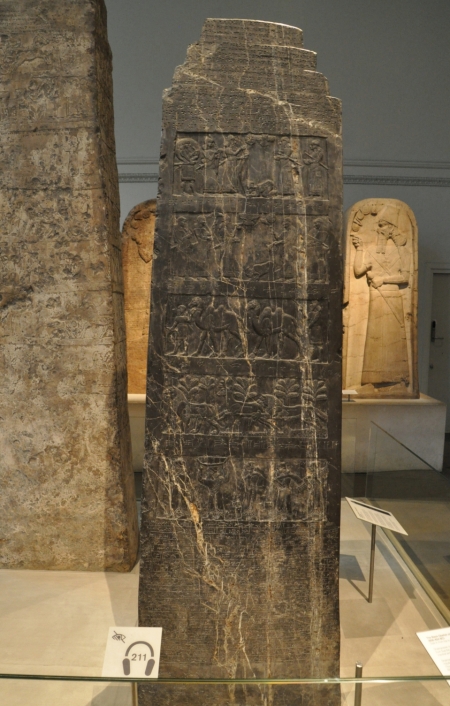 Todd Bolen has an article on the Obelisk here.