Philadelphia, the Church with an Open Door

We continue to give attention to the cities of the Seven Churches addressed in Rev. 2-3, looking now at Philadelphia, modern Alasehir.  The churches at Philadelphia and Smyrna were both commended by the Lord; there were no charges of wrong doing against either congregation.

Further, Jesus said, “Look! I have put in front of you an open door that no one can shut” (Rev.3:8).  Many biblical students believe that the “open door” refers to Philadelphia’s location, on the great trade-route from Smyrna to the highlands of Phrygia.  Their faithfulness would be rewarded by further opportunities to proclaim the gospel to the many merchants and other travelers passing through this strategic site.

Our photo below shows view from the lower city, looking between Byzantine columns (Church of St. John), looking up to the acropolis.

Very little excavation has been done in Philadelphia.  In photo below you can see some of the excavated area.

From the acropolis looking down one has a good view of Philadelphia.

Click on image for larger view.  More to come on Philadelphia.

The Island of Patmos

Greetings from Athens, Greece.  Our ship arrived at the Athens Piraeus Habor this morning, having visited the islands of Patmos, Rhodes, Crete, and Santorini.  On Paul’s 2nd Missionary Journey, when he left Beroea because of persecution, Luke writes:  “Then the brothers immediately sent Paul off on his way to the sea, but Silas and Timothy remained there” (Acts 17:14, ESV). Paul apparently sailed from Beroea to Athens, and likely would have used the large Piraeus Harbor.

In our travels, our group has seen the cities of the Seven Churches of Rev. 2-3: Ephesus, Smyrna, Pergamum, Thyatira, Sardis, Philadelphia and Laodicea. It was the island of Patmos from which John wrote the book of Revelation, having been exiled there because of his faith.  He was exiled on the island of Patmos “because of the word of God and the testimony of Jesus” (1:9).

Pictured here below is Patmos. You can see the harbor of Scala in the center. 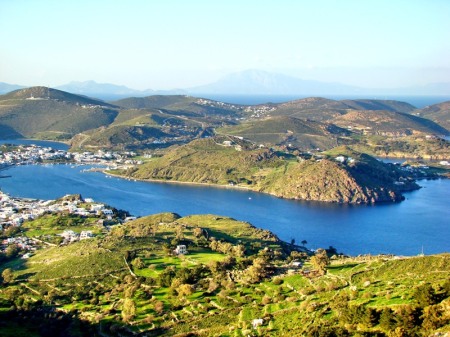 Today we visited Mars Hill, the acropolis, and the Athens Museum.  Tomorrow we are to go to Corinth.  I did not have a workable system while on the Med. cruise, so I am a bit behind on the blog.  I plan to post some more photos of the sites of the Seven Churches, and other sites in Turkey, as well as some on Athens and Corinth, so continue to check the blog.

Pergamum, where Satan’s throne was located

Today we visited the sites of Pergamum and Thyatira.  En route to Pergamum Harold Comer read the text from Rev. 2 which contains the letters to the churches in those respective cities, and made appropriate comments.  Jesus said that Pergamum was the place where Satan’s throne was.  He may have had reference to the altar of Zeus which was so prominent in the city.  Others suggest that the worship of Roman emperors was meant.  There were also temples to Athena, Dionysus, Serapis, Asclepius and others, so it could be that all of these combined meant that Satan’s influence was deeply entrenched there. Sometimes people are heard to say that if they had lived in the 1st century it would have been much easier and simpler to be a Christian then; that is simply not true!  Christians at Pergamum were called upon to live holy lives in the midst of idolatry, immorality, and false religion.

Here is a group shot which shows the temple of Emperor Trajan (reigned A.D. 98-117) in the background.

The altar of Zeus would have been seen for miles around.  The friezes of the battle scenes were disassembled and removed to Berlin where they are on display. You can see the steps leading up to the altar as well as the square outline of its parameter in this photo:

Pergamum has the steepest theater in the world; it follows the natural incline of the slope.

Tomorrow we are to continue our biblical study tour as we journey to Aphrodisias, Philadelphia, and Hierapolis.