The Roman city of Pompeii, as was generally the case in the world of the 1st century, was a city of many gods.

Pompeii–as you might expect, given its many gods–had many temples, though by no means one for every god or goddess who might intervene in the lives of its inhabitants. They came in all sizes, in varying degrees of prominence and with very different histories. Some stretched back to the earliest years of the city. The temple of Apollo next to  the Forum was established by the sixth century BCE at the latest. (The Fires of Vesuvius.281-282).

Temple of Apollo, Pompeii, Italy. Photo by Leon Mauldin. Mt. Vesuvius may been seen the the background.

Most of the rest [of the temples] date to the second century BCE or later. The Small Temple of Fortuna Augusta was dedicated to an almost untranslatable combination of the goddess of Good Fortune or Success (Fortuna) and the power of the emperor (the adjective Augusta can confusingly, or conveniently, refer either to the first emperor Augustus himself, or to imperial power more generally–for subsequent emperors used “Augustus” as part of  their titles too)  (Ibid.)

Pompeii is a city “frozen” in time by the eruption of Mt. Vesuvius, AD 79. Though this is not a “biblical city” it preserves scenes from a Roman city in the AD 1st century, and thus has tremendous value to us. Thus it helps us to see the setting for the biblical world in the early New Testament era.

When contemplating the widespread idolatry of the biblical world, I often think of Paul’s statement to the Corinthians, many of whom had themselves formerly been idolaters:

we know that “an idol is nothing in the world,” and that “there is no God but one.” For even if there are so-called gods, whether in heaven or on earth– as there are many “gods” and many “lords”– yet for us there is one God, the Father, from whom are all things, and we for Him; and one Lord, Jesus Christ, through whom are all things, and we through Him. However, not everyone has this knowledge. (1 Cor. 6:4-7, HCSB).

Today completes our tour of Italy. We have been blessed in so many ways throughout this trip. The weather has been ideal. Tomorrow we are to leave the hotel about 3:00 AM for the airport at Rome. In the days ahead I hope to sort through the photos and share some on this blog.

Sunday afternoon we had the occasion to visit Pompeii. Pompeii is a city “frozen” in time by the eruption of Mt. Vesuvius, AD 79. Though this is not a “biblical city” it preserves scenes from a Roman city in the AD 1st century, and thus has tremendous value to us. Thus it helps us to see the setting for the biblical world in the early New Testament era. 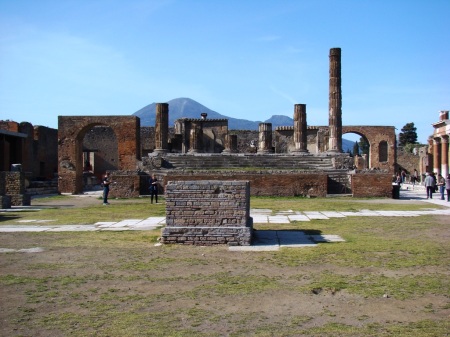 Our photo shows the Temple of Jupiter in Pompeii at the north end of its forum.  You can see Mt. Vesuvius in the background.

Jupiter was the most important divinity in Ancient Rome.
While at this site we had a group photo made.

The eruption  began about midday on August 24, AD 79. It was a catastrophe for the inhabitants of the small cities who had lived for hundreds of years in the fertile lands under Mt. Vesuvius. Apparently no one had suspected the mountain of being a potential volcano. Though some escaped, thousands were killed when the vast eruption blew off the top of the mountain. Pompeii was covered with 17 feet of volcanic matter, and nearby Herculaneum was covered to a depth of up to 70 feet!

Vesuvius’ eruption has proved an immense blessing to posterity, for it has preserved—almost ghoulishly—intact the houses, artifacts and corpses of two prosperous, fashionable towns as the Roman Empire neared its zenith. Bread has been left preserved in ovens, meals left ready on tables, scurriloius election notices for the forthcoming curia (council) elections—“Thieves support Vatius for aedile!”—survive on the walls. Inside the houses the bodies of lovers have been found in doomed embrace, while in the streets looters were overwhelmed with their booty. Without that terrible day, our knowledge of ordinary Roman life would be far less vivid (Nigel Rodgers, Roman Empire, p.356).