In Acts 17, when Paul preached at Athens, he was taken to the Areopagus where he was invited to explain what the Athenians called “this new teaching” (Acts 17:16-19). We have previously posted on Paul’s sermon at the Areopagus here and here.

In this post we want to notice one of the many sites you can see while standing atop the Areopagus. Here is the view looking to the southwest. 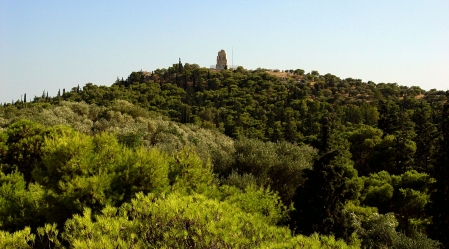 The Hill of Philopappus is also called Mouseion Hill. Gaius Julius Antiochus Epiphanes Philopappus (AD 65-116) was a prince from the Kingdom of Commagene (northern Syria), and a Roman consul and senator, as well as grandson of Antiochos IV. At his death a white Pentelic marble tomb monument was dedicated to him by his sister Julia Babilla and the citizens of Athens. Here is a closer view: 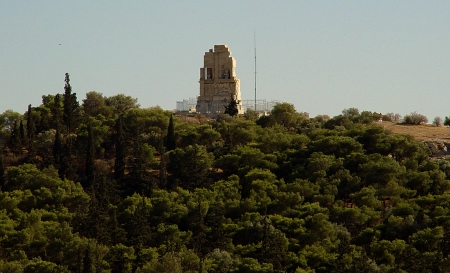 This of course is just one of many major landmarks in Athens. Near the monument are the remains of a prison where it is claimed that Socrates was imprisoned and died.

Lonely Planet makes this observation regarding this hill:

Inhabited from prehistoric times to the post-Byzantine era, the area was, according to Plutarch, the area where Theseus and the Amazons did battle. In the 4th and 5th centuries BC, defensive fortifications – such as the Themistoclean wall and the Diateichisma – extended over the hill, and some of their remains are still visible. (Lonelyplanet.com).