The Nile River in Egypt

The Nile River is mentioned numerous times in the Bible. It was truly the “lifeblood” of Egypt.

These folks in the two boats in the photo had either been fishing or were about to go, as they had fishing nets with them.

From Harper’s Bible Dictionary we have this info on the Nile:

the great river of Egypt flowing north from its sources in Lake Victoria in Uganda and in the highlands of Ethiopia, a distance of 4,037 miles, the entire length of the Sudan and Egypt, to the Mediterranean. The two major branches, the White Nile (from Lake Victoria) and the Blue Nile (from Ethiopia), merge at Khartoum, with one modest tributary somewhat farther to the north and none at all in Egypt itself. Beyond Khartoum the Nile flows through several cataracts, inhibiting navigation but not preventing it. The last cataract is at Aswan, the beginning of the Nile Valley proper. (Because the Nile flows from south to north, the southern Nile valley is referred to as Upper Egypt.) From here on the Nile flows north in a well-developed valley with cliffs on either side almost as far as Cairo, and the river becomes important for its overflow and the hydraulic irrigation of the adjoining floodplain. Within the Nile Valley the river is fairly constant at about six-tenths of a mile in width, whereas the valley varies from six to nine miles across (p.705).

The land of Egypt has great significance for the biblical narrative. God told Jacob, father of the twelve tribes of Israel, that He would make of him a great nation in Egypt (Gen. 46:3). As the book of Exodus opens, Israel is already a numerous people, and the new pharaoh of Egypt felt he had to take oppressive measures against them (Ex. 1).

While a young child, Jesus, along with Joseph and Mary, were told to leave Bethlehem (where Herod would seek to kill them), and flee to Egypt. “Now when they [the wise men from the East] had gone, behold, an angel of the Lord appeared to Joseph in a dream and said, “Get up! Take the Child and His mother and flee to Egypt, and remain there until I tell you; for Herod is going to search for the Child to destroy Him” (Matt. 2:13)

The Nile River makes life in Egypt possible, both in ancient as well as modern times.

I’ve previously written on the Nile here and here.

One of the enjoyable elements of travel to the Bible lands can be the folks you share the experience with. I have been privileged on two trips to have my daughter Alysha with me, both in Israel and in Egypt.

It’s a treat when you’re in Egypt to sail on the Nile in a Felucca. We took a short excursion one afternoon, August, 2003.

There were other feluccas along the bank, ready for use. 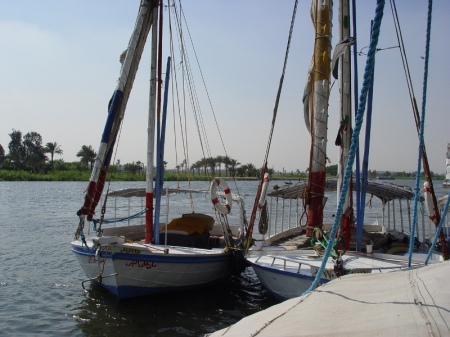 When I saw the reeds along the Nile River I thought of Moses’ experience as a baby.  Hebrew male babies born at that time were literally under a death sentence from Pharaoh.  Moses’ mother hid him three months– “But when she was no longer able to hide him, she took a papyrus basket for him and sealed it with bitumen and pitch. She put the child in it and set it among the reeds along the edge of the Nile” (Ex. 2:3, NET).  See how this text is illustrated by our photo:

Reeds along the Nile. Baby Moses was placed in a basket in a setting like this. Photo ©Leon Mauldin.

In God’s good providence Pharaoh’s daughter had compassion on the Hebrew baby, and allowed him to live. She gave him the name Moses, and secured a Hebrew nurse, Moses’ mother!